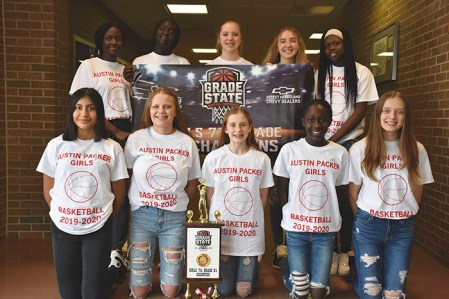 The Austin girls basketball program has made a big push in the last two seasons, racking up 41 wins in two seasons and the team looks to be on the verge of gaining some major reinforcements.

The Austin Youth Basketball seventh grade girls team recently wrapped up its second straight quality season as it won the Big Nine and won the Grade State MYAS tournament over Annandale. The same team won the Big Nine as sixth graders, but it lost the state title game to Becker in overtime that season.

Much like their older counterparts, the Packers play a fast-paced style with a lot of defense and a lot running.

“I think one strength we have as a team is our defense, we really come together on that,” Austin player Marissa Shute said. “We take the fast break when it’s there, but sometimes we slow it down and set up a play.”

Many of the players on this team have been together since they were third graders and the team has improved through working together and occasionally practicing with the high school team. The group has also learned to come out with a winning mentality.

“The best part of the year was winning state,” Austin player Ajiem Agwa said. “We know how to work the ball very quickly and this year has been our best year with that.”

Coaches Nicole Shute and Andrew Brede have gone to all of the lengths they can think of to keep the team going. They offer rides to kids to and from practice and they take them to tournaments as well.

“We have a really diverse set of girls and a lot of culture is on our team. We’ve brought them together as a family,” Nicole said. “We’ve gone out of the way to keep them involved.” 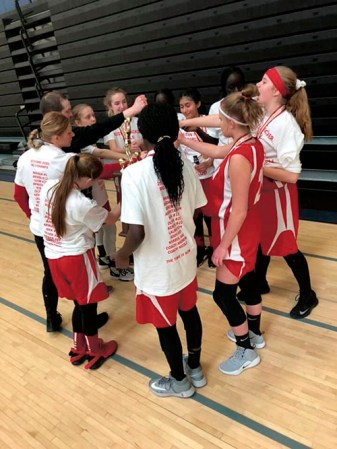 Brede has seen the team put together runs of great play, even when things seem to be going wrong.

“We were unsure of what we were going to get this year, but they have a way of flipping the switch on and when they do that, they’re a very tough team to beat,” Brede said. “They’re great kids and it’s worth helping them out and keeping them in the gym. We keep them working at basketball and most importantly, we work at keeping their grades up.”

Nyabol Gach comes from a basketball family as she is the younger sibling of Austin grads Gach Gach, who played at Western Texas A & M, Both Gach, who now plays at Utah, and Duoth Gach, who was recently named MonDak player of the year.

Nyabol is just starting her own basketball journey, but she’s able to learn from Both and Duoth by watching them online or on TV whenever they play.

“They inspire me. I pay attention and focus on what they do when they’re on the court,” Nyabol said. “I think it makes it easier (with them out of the house). I can see them on TV, watch what they do and then reflect on it.”

While the team has learned the art of winning, it has also mastered the method of bonding.

“We’re all very close as a group,” said Austin player Kenzie Brede. “It’s really fun to have a team that’s so close with each other.”

Hulne: One crazy week has had a huge effect on sports and life

Last week is, without a doubt, the strangest week I have ever experienced. It began with me doing playoff previews... read more