An Austin woman police believe aided a suspect linked to a Sunday morning burglary and assault case made her first appearance on Thursday in Mower County District Court.

Jaiden Pamela Schumacher, 20, has been charged with felony aiding an offender – attempted murder and first-degree burglary.

Court documents state that police responded to a shooting report at 12:15 a.m. on Feb. 16 at a residence in the 100 block of 13th Street Northeast. An adult male was found facedown on the floor of the residence and was bleeding from a head wound. Officers rolled him over and found a spent shell casing on the floor under his chest; the bullet was later found embedded in a wall. 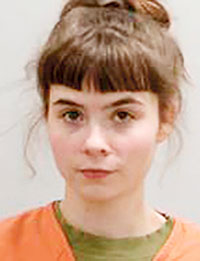 The victim said he answered the door and a man wearing all black, including a black mask, forced his way in and struck him repeatedly in the head with a gun. He heard the gun go off and believed he had been shot.

Doorbell surveillance footage of a white vehicle at the scene when the incident occurred was sent to outside agencies. The Albert Lea Police Department recognized the vehicle as a 2017 Toyota Camry, driven by a juvenile male, they had dealt with in December. They provided the registration information to the Austin Police Department, who located the vehicle at the registered address in Austin.

Officers spotted a gas mask in plain sight inside the vehicle and obtained a search warrant for the vehicle and the residence. Police spoke with the juvenile, a 17-year-old male, who they learned had been driving the vehicle. The juvenile said he had been at a friend’s house when he received a call from “Fooley” asking for a ride around midnight. He said he picked “Fooley” up and indicated he had a gas mask, but did not say anything about a burglary. He said he drove “Fooley” to McDonalds and returned to his friend’s house.

The juvenile gave officers the pass code to his phone. They saw Facetime video messages to and from “Fooley” at 11:37 p.m. and 11:57 p.m. on Feb. 15. There was also a 12:44 a.m. Facteime call from “Jaiden.” Police then matched phone numbers for “Fooley” to a phone registered to Schumacher, the girlfriend of Cham Nygare Gilo, 21, of Austin. Officers searched social media and found that Gilo went by the nickname “KOA Fooley.”

A detective spoke to the juvenile, who indicated he received a Facetime message from Gilo to pick him up at Schumacher’s residence. When he arrived, he sent a Facetime message to tell Gilo he was there. He said he believed he was driving Gilo to the address of one of the victim’s roommates, who he said had stolen $5,000 from Gilo. He indicated Gilo put on a gas mask that belonged to the juvenile before they got to the residence. When they arrived, Gilo went in and the juvenile waited until he came back, after which he dropped him off at Schumacher’s residence and went back to his friend’s house.

Gilo has since been charged with six felonies in the case, including attempted murder and burglary.

Schumacher was initially released from jail. At about 12:08 p.m. on Feb. 17, Gilo called Schumacher from the Mower County Jail and they discussed the search warrant executed on their residence. During the conversation, Gilo asked, “Bro grab the heat?” Schumacher responded, “Yeah, it’s gone. he said it’s good.” They then discussed the juvenile’s arrest; Schumacher said the juvenile did not say anything. Gilo then indicated he did not want law enforcement going through his Snapchat account and Schumacher said she took care of that right away. Schumacher also indicated during jail calls that she changed the passwords on his accounts and disposed of her phone that he used.

Schumacher will appear in court again on March 5.

An Austin man who allegedly sexually assaulted a four-year-old girl made his first appearance in Mower County District Court on... read more