Suzanne L. Anderson Brimacomb, 66, of Farmington, Minnesota, passed away surrounded by her family after a long courageous battle with cancer on Saturday, Feb. 8, 2020. She had five different cancers eight times over the years. 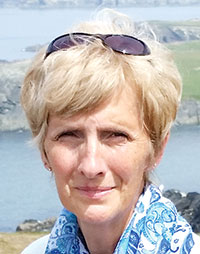 She was born Jan. 5, 1954, in Austin, Minnesota, to Edward “Swede” and Juanita Anderson. Suzanne “Suzie” had many jobs throughout her life. She was a baker/cake decorator in a bakery, late evening waitress, worked in the tech department in a school, but finally settled in as a media assistant at her school in the South St. Paul school district for 15 years before being forced to retire from cancer. It was the perfect job for a voracious reader. She also loved that it allowed her to help get kids addicted to books. Suzie was a gardener, card crafter, seasonal decorator, Halloween enthusiast and caramel maker extraordinaire. She was an animal advocate, belonging to the ASPCA, supporting Last Hope pet rescue in Farmington and the Animal Humane Society in Golden Valley, Minnesota.

Visitation will be held from 11 a.m. to 2 p.m. on Saturday, Feb. 15, 2020, at Henry W. Anderson Mortuary, 14850 Garrett Ave., Apple Valley, MN. A celebration of Suzanne’s life will be celebrated at a later date. In lieu of flowers, memorials may be made to the ASPCA, Last Hope of Farmington, or the Animal Humane Society of Golden Valley.