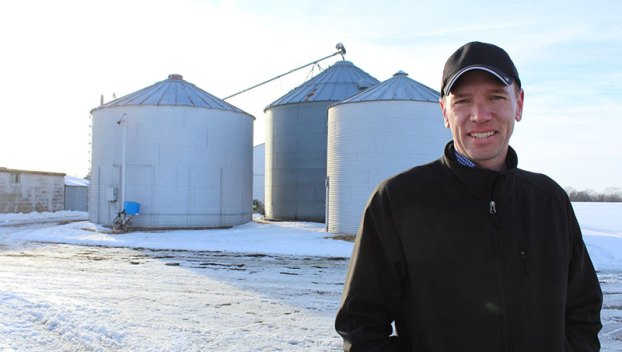 In many ways, Justin Jordan is the quintessential Iowa farmer. He grows soybeans and corn while raising beef cattle on his 410 rolling acres that sit about an hour southeast of Des Moines, Iowa.

He’s the fifth generation of farmers in his family. But Jordan tends his land differently from his father and those before him. He practices no-till farming, plants cover crops and uses as few chemical-based fertilizers as possible — all with the end goal of healthier soil and water.

“Basically, trying to farm as close to nature as possible,” Jordan said.

Those practices are also good for the climate because they store carbon in the ground. Jordan knows farmers like him are in the minority. But being in Iowa, these climate-conscious farmers have had the ear of presidential candidates for the past year. They’ve taken advantage of it, too.

Jordan discussed his climate-friendly farm practices with Joe Biden and Kamala Harris this election cycle. Other like-minded farmers have done the same with other Democratic candidates.

This small group of farmers in Iowa believe they’ve influenced the field of Democratic presidential candidates to focus more on climate change and how agriculture can be part of the solution to global warming.

“Certainly they’re talking about climate more than they even were a year ago when the campaign started,” said Laura Krouse, a farmer from near Mt. Vernon, Iowa. “They didn’t really talk about climate at all and now they do all the time.”

All four Democratic front-runners — Bernie Sanders, Pete Buttigieg, Elizabeth Warren and Joe Biden — have climate plans that specifically address how farmers can be part of the climate change solution. Their plans would have implications for agriculture in Minnesota, Iowa and beyond.

Overall, the climate conversation has evolved from the 2016 presidential campaign, at least on the Democratic side. Rather than talking about whether climate change is worth addressing, candidates are getting into specifics on how to do so, said Jessica Hellman, director of the University of Minnesota’s Institute on the Environment.

For example, she said, candidates differ on “how much they rely on policy and incentives to stimulate economic change, and how much they’re willing to specifically allocate from the federal government to to steer that process.”

A popular strategy among farmers here is government-incentivized carbon sequestration. In other words, paying farmers for using techniques that keep carbon in the ground rather than in the air where it causes climate change.

Many Democratic candidates are calling for this exact plan. Sanders’ platform says it outright: “We will pay farmers $160 billion for the soil health improvements they make and for the carbon they sequester, which both mitigates climate change and helps farmers adapt to it.” Warren’s says she would “pay farmers for environmental conservation.”

Jordan already practices carbon sequestration on his farm through cover crops and no-till. He also has land in the Conservation Reserve Program, or CRP, in which the federal government pays him over a 10-year contract to set aside land for native seed and flower mixes — not marketable crops.

These practices can help keep carbon in the ground, but there’s currently no direct financial incentive for carbon sequestration.

“Farmers want to do the right thing as far as their land and the climate and they want to be helpful,” said Megan Suhr, a City Council member in rural Knoxville, Iowa, and former county Democratic chair. “But if they’re not incentivized, it costs them too much.”

Money is why farmers like Jordan are in the minority, for now. But he’s convinced that’ll change — and climate change’s negative impacts on farmers could hasten the transition.

A few years back, Laura Krouse’s farm got hit with 14 inches of rain in one night, an amount that was “unheard of,” she said.

“The road washed out on both sides of my farm,” she said.

“The 6-foot-tall culvert was the only thing that was showing on the road on the west side of my farm. And on the east side of my farm, a log had crossed the road and was laying crossways and nobody could get through.”

That was a problem — Krouse’s income relies on subscriptions sold to people who want a share of her vegetables (this is sometimes called a CSA). With the road flooded, they couldn’t come pick up their purchase.

The rain wasn’t an isolated incident. Krouse has seen more plant disease than she did a decade ago, due to climate change.

“Our nights are warmer and damper than they used to be, Krouse said. “That’s a perfect place to grow plant-disease-causing bacteria in the super soppy, warm environment at night.”

Shifts in rain and temperature have made it more difficult for her to plant during increasingly wet springs. She sees drier summers before late-season rain that pushes her harvest into the fall.

Floods and other severe weather events are becoming commonplace.

“The storm events are becoming more frequent and more extreme,” Krouse said. “ As are cold events and heat events — every kind of weather extreme that you can that we have in Iowa.”

Before Jordan began practicing no-till and planting cover crops, all the rain was eroding his soil and reducing its organic matter. Since switching, his land has stored a greenhouse gas and has become more fertile.

“Just in about 12 years, I’ve actually doubled my organic matter,” he said, “which has also helped the productivity of my soil.”

Jordan realizes that not all farmers have the ability to wait over a decade to reap the benefits of no-till and cover crops. But climate change isn’t going away, and he’s hopeful more farmers — and politicians — realize the potential farmers have for mitigating climate change while running a healthier farm.

“We’re slowly going to get to a point where these practices I do on this farm will be commonplace,” he said.