According to Austin Police Chief David McKichan, Austin police, Mower County deputies and agents with the Southeast Minnesota Violent Crimes Enforcement Team executed a search warrant Thursday morning on two adjacent apartments in the 1000 block of Second Avenue Southwest. Law enforcement recovered over six grams of suspected methamphetamine from one of the apartments. The second apartment was vacant, though McKichan indicated police believed it was being used for drug-related activity. 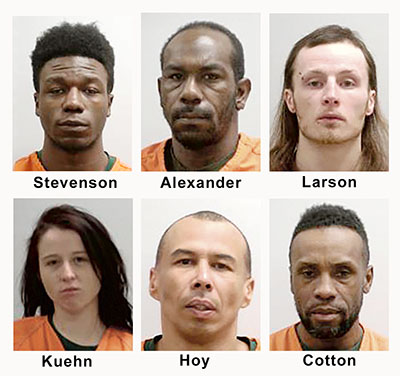 All six made first appearances on Friday in Mower County District Court.

Alexander and Cotton have been charged with felony first-degree drugs – sale of 17 grams or more of methamphetamine within a 90-day period.

Kuehn has been charged with felony third-degree drugs – possess methamphetamine in a park zone – and felony fifth-degree drug possession.

Larson and Stevenson have been charged with felony third-degree drugs – possess methamphetamine in a park zone – and gross misdemeanor fifth-degree drug possession.

All will appear in court again on March 5.

Rep. Jeanne Poppe is a champion for rural Minnesota

We are fortunate to have a great supporter of agriculture and rural Minnesota serving as chair of the Minnesota House... read more