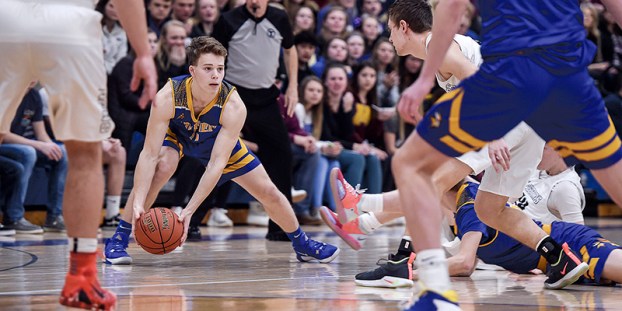 Showdown in Hayfield: BP’s Kittelson comes up big to seal the win

HAYFIELD —Blooming Prairie Drew Kittelson had no way of knowing his first big varsity moments would come in a showdown at Hayfield, but he certainly was ready when they came as he helped the Awesome Blossoms beat the Vikings 59-54 Friday.

Kittelson scored the go-ahead bucket when he cut to the hoop and put in a lay-up on dish from Gabe Hagen to make it 56-54 BP with 59 seconds left and he sealed the win when he blocked Easton Fritcher’s three-point attempt with 13 seconds left in the game.

Kittelson finished with 11 points, four rebounds and three blocks as he filled in for Karson Vigeland, who was injured in the first half. Kittelson was certainly playing like he’d been there before when he cut at the right time for Hagen with the game on the line.

“Gabe and I are pretty good friends and we think alike,” Kittelson said. “That was my first time (playing key minutes) and I was a little nervous, but I have a good team around me. I thought I was pretty prepared because we had a good week of practice and we have a lot of good leadership.”

Hayfield had tied the game at 54-54 when Isaac Matti knocked down a three-pointer with 1:11 left in the game, but Matti couldn’t connect on a go-ahead triple with 25 seconds left Hayfield trailing 56-54.

Hagen led the BP offense from the paint as he racked up 10 points, seven rebounds and 10 assists. He was able to spot Hayfield’s double teams almost before they arrived throughout the night.

“I knew they were going to try and double me every time I got the ball. I was looking for who was going to double off me and I was looking for their guy,” Hagen said. “They’re a tough team and they have a lot of length. They match up really well with us and we kind of got off to a slow start and that didn’t help. We pulled it off and that was good.” 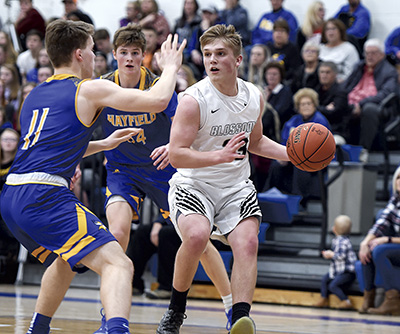 Blooming Prairie’s Parker Vaith with the inside drive against Hayfield Friday night in Hayfield. Eric Johnson/photodesk@austindailyherald.com

Ethan Slaathaug finished with 24 points and six rebounds for Hayfield (15-5 overall, 7-4 Gopher), which jumped out to a 17-5 lead to start the game as it got out and running. However, BP (16-2 overall, 8-1 Gopher) closed the half on a 24-12 burst over the final 10 minutes. Parker Vaith hit a jump shot and scored off a steal in the final minute of the half to put the Blossoms up 29-27 at the break.

“It’s tough. They’re so long. If you can break that first line, you have opportunities to score on them,” Hayfield head coach Chris Pack said of playing BP. “We did that early and that was a great way to start the game. We couldn’t sustain that for 38 minutes and I just thought we had too many bad turnovers.”

BP has now sept the season series from Hayfield, but the two squads could likely meet up again in the playoffs. Fritcher is hoping Hayfield can turn the tables if the teams meet a third time in the postseason.

“Against most teams we play, we can just go up and shoot when they have good looks. They’ve got 6-3 across the board and they jump high,” Fritcher said. “They went on a little run and we didn’t answer. If we keep up our heads the next time we play them, we’re going to get that win. This stings and we don’t like losing, but this is going to make us work harder.” 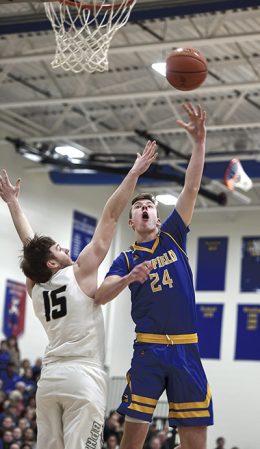 Hayfield’s Luke Dudycha puts up the mini-hook past Blooming Prairie’s Karson Vigeland in the first half Friday night in Hayfield. Eric Johnson/photodesk#@austindailyherald.com 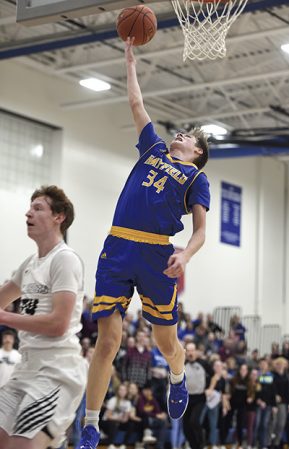 Hayfield’s Ethan Slaathaug gets the lay-up against Blooming Prairie in the first half Friday night in Hayfield. Eric Johnson/photodesk@austindailyherald.com