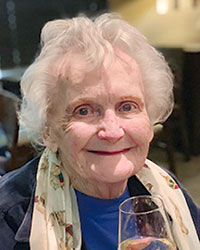 Ruth Ann was born Oct. 31, 1928, in Austin, Minnesota, the eldest daughter of Garnet and Marvel (Farrington) Kough. She had an interesting childhood working for the Hormel family as a governess when she was a teen. Ruth’s father, Garnet Kough, owned and operated the Kough Transfer and Taxi service in Austin and was co-owner of Ford and Kough Circus. Ruth performed acts on the trapeze. After graduating from Austin High School, Ruth Ann worked for Northwest Bell as a phone operator in both Austin and San Diego, California. Later in life, she was a home health aide. Ruth was a humble, understanding and patient woman. She had a pure heart and gave unconditional love to all. Ruth married Frank Madden on Nov. 11, 1961, at St. Augustine Catholic Church in Austin. She resided in Austin until she moved to Rochester in 2002.  Ruth had the ability to spread joy wherever she was. She had a contagious laugh and a great sense of humor.  Ruth will be sadly missed and is rejoicing in our Father’s light.

The family would like to give special thanks to Dede for her many years of care and friendship to Ruth.

A prayer service will be held at 2 p.m. on Friday, Feb. 7, 2020, at Mayer Funeral Home with Father James Steffes officiating. Friends may call for two hours prior to the service on Friday at the funeral home. Interment will be in Calvary Cemetery. Condolences may be left online at www.mayerfh.com.