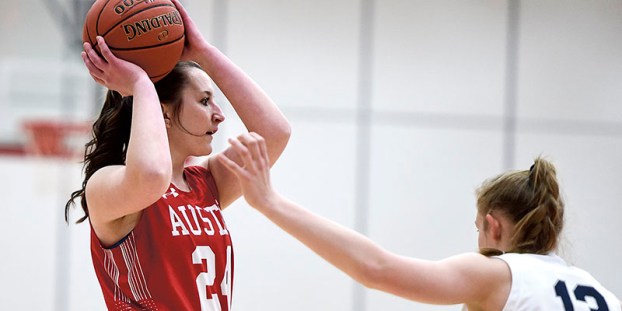 Austin’s Ellie Tupy casts an eye inside during the first half against Rochester Century Friday night in Ove Berven Gym. Eric Johnson/photodesk@austindailyherald.com

It took a little bit of negotiating, but the Austin girls basketball team was able to get all five of its seniors on the floor to start the game on senior night in a 74-40 win over Rochester Century in Ove Gym Friday.

The Packers put their four healthy seniors on the floor, along with Emily Bollum, who is out for the season with a knee injury. Century (6-20 overall, 5-17 Big Nine) allowed Austin to win the opening tap, the Packers took an over and back violation after giving Bollum the ball and she left the game, while inspiring her team to play hard.

Austin senior Colie Justice went on to score 19 points to go with seven rebounds and three assists in the win and she was motivated by seeing Bollum on the floor one last time.

“We all feel so bad for Emily. I know what it’s like to be injured and it sucks,” Justice said. “It stinks that bad things happen to good people, but it meant a lot to have all five of us out there.” 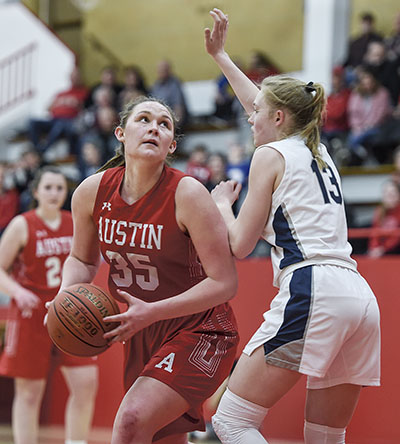 Austin’s Kyra Walters swings to the hoop during the first half against Rochester Century Friday night in Ove Berven Gym. Eric Johnson/photodesk@austindailyherald.com

The Packers (20-6 overall, 17-5 Big Nine) scored the first 10 points of the game and the Panthers got no closer than eight the rest of the way.

Walters has played with Bollum for all four of her years in high school.

“Were were all in our emotions and we have a special bond with Emily, But once we got going, it was just like any other game,” Walters said. “We had to work hard.” 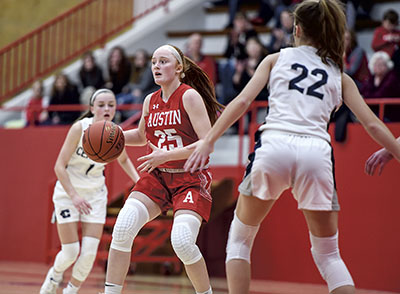 Cassidy Schute with the ball during the first half against Rochester Century Friday night in Ove Berven Gym. Eric Johnson/photodesk@austindailyherald.com

Austin head coach Eric Zoske said it meant a lot to get his five seniors on the court together.

“I just want to thank Century and their head coach for being class acts and letting Emily start,” he said. “It meant a lot for her and it was a special moment for her. We had a special group of seniors this year and we’re happy for the seniors. I’m happy that we played the way we did tonight.”

Austin will open postseason play in Ove Berven Gym at 7 p.m. Wednesday. The Packers may be a little shorthanded as Hope Dudycha hasn’t played in three weeks and Elyse Hebrink went down with an ankle injury in Friday’s win. Ruby Kvam was injured in the JV game.

“We lost two kids tonight,” Zoske said. “I’m not sure why this is all happening at this time of year, but this will be a battle for us. We’ll have to get some productivity out of some bench kids and they’ll have to be ready. We are as thin as we’ve been as we’ve been since I’ve been here as a head coach.” 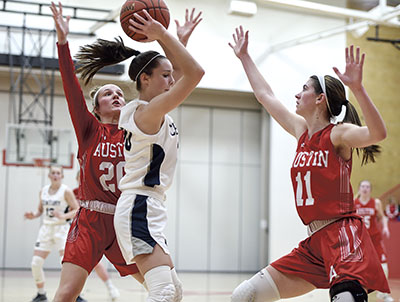 Austin’s Elyse Hebrink, left, and Colie Justice put on the pressure during the first half against Rochester Century Friday night in Ove Berven Gym. Eric Johnson/photodesk@austindailyherald.com