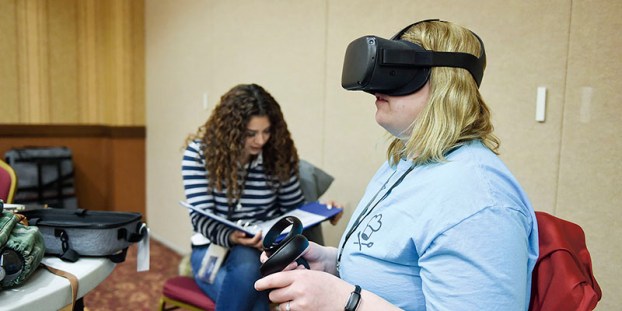 Kayla Mattick uses a VR headset to take part in an interactive team-building exercise Friday morning at the Hormel HIstoric Home during a meeting of the Mower County CEO Program. Eric Johnson/photodesk@austindailyherald.com

In just its second year, the Mower County CEO Program continues to introduce Austin and Pacelli students to the world of business, but this year the program is also using those skills to tap into the diversity that is setting Austin apart.

Each year, the students of the program think up and organize a fundraising event, this year titled “Together We Are Austin,” that will help fund the business endeavors of those students involved. This year, the fundraiser, which will host a variety of groups and foods, will touch on the diversity of the program itself. 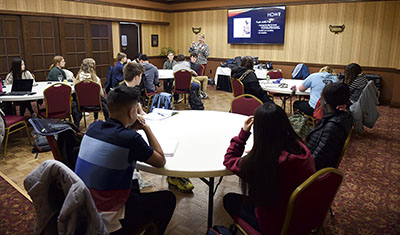 The Mower County CEO Program met Friday morning at the Hormel Historic Home. The program will be hosting a fundraiser on Sunday, March 8. Eric Johnson/photodesk@austindailyherald.com

“We were just looking around the classroom and noticed it was pretty diverse,” said Pacelli senior Carter King, who is part of the Mower CEO program and partnered with William Kahle for their business Larva Lures, which sells fishing lures and jigs.

Money raised will go toward continued support of the CEO Program.

“It goes back into the program to fund our own businesses,” King said. “There’s the potential to build further businesses for those who will be part of the program in the future.”

Program facilitator Emily Hovland explained that the effort for organizing the fundraiser falls entirely on the shoulders of the students involved. In the process of organizing this event, she was impressed at not only the idea but the amount of work the students put in. 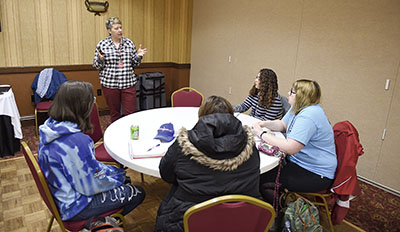 Planning of the event also ties into the program directly in terms of using those things they learn for starting businesses.

“All throughout, business people from the community come in three to four times a week to educate (students) on what happens in the real world,” Hovland said, explaining that the students take those things learned and apply them to organizing the event. “The students truly have to do everything. Budgeting, marketing to various groups, sell tickets — these are 17 to 18 year old kids and they go from ground zero and have to build up those bridges.”

The cost is $35 a ticket. For more information you are invited to message Mower County CEO through their Facebook at www.facebook.com/MowerCountyCEO/ or contact Austin or Pacelli schools.

Don’t let the title of livestock judges fool you. This Austin FFA team is competing, not officiating, and this past... read more