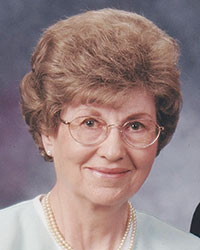 Pearl was born March 19, 1929, to Paul and Ruth (Beck) Tucker. She attended school in Brownsdale, Minnesota, through eighth grade and graduated from Austin High School in 1947. Pearl married Jack Brennan on April 23, 1950. She worked for the Northwestern Bell Telephone Company and was a Mary Kay consultant for 15 years.

Pearl enjoyed meeting people. She developed many friendships as a Red Cross volunteer for 40 years and as a member of the Hospital Auxiliary. She and Jack were active members of Fellowship Methodist Church and were later members of First United Methodist Church. She made hundreds of baby blankets for newborns and numerous lap robes for disabled veterans. She was part of a Lyme Disease support group for many years.

A memorial service will be held at 2 p.m. on Saturday, Feb. 29, 2020, at Clasen-Jordan Mortuary with the Rev. Dr. Donna Dempewolf officiating. Visitation will be for one hour prior to the service on Saturday at the funeral home. Interment will be at a later date in the Grandview Cemetery. In lieu of flowers, the family prefers memorials to the Lyme Disease Foundation.