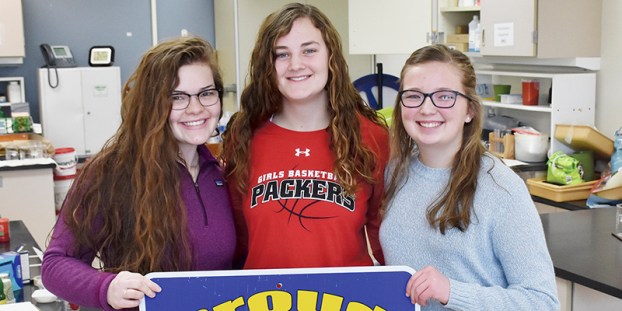 Don’t let the title of livestock judges fool you. This Austin FFA team is competing, not officiating, and this past year, they’ve made it big.

After placing second in the state competition in May 2019, the team of seniors Emily Bollum and Mya Burkhart and sophomore Riley Hetzel earned a spot in the nationals competition, held in January in Denver, Colorado.

During livestock judging competitions, contestants are graded on their assessments of animals ranging from cattle to goats and more. They have to be able to assess whether or not an animal has suitable qualities for what it is supposed to be, whether that is as something going to market or one that will be used for breeding. 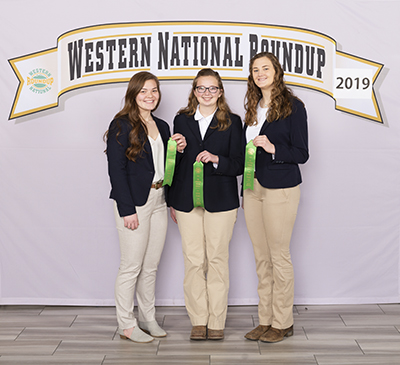 Burkhart, Hetzel and Bollum finished fifth at the Western National Roundup last year, just one of the successes they’ve been enjoying. Photo provided

In some cases, the three will even dive into genetic and performance information collected on the specimen.

Many contestants go on to perform with collegiate teams or volunteer as judges at livestock shows at fairs.

“They just continue because they enjoy it so much as they did it when they grew up and they want to give back to the community and give other kids that experience,” Bollum said.

For people who have been doing these things their whole lives, it would be weird just to stop, Burkhart said.

Even if these skills are not used in judging competitions, people like Bollum will continue to use the skills they’ve developed over the years as they work with their herds.

For the three students, the competition has been the latest development in a long time of working with cattle. 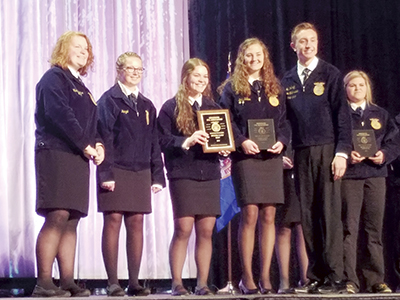 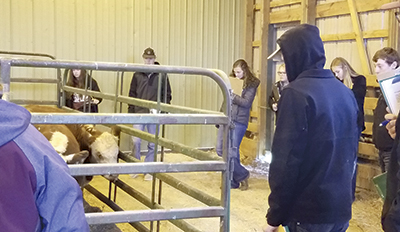 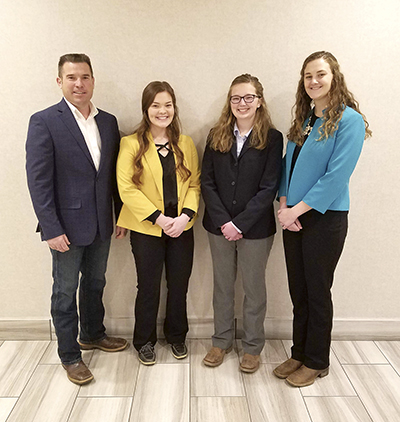 Bollum and Hetzel both have families involved in agriculture, while Burkhart showed cattle owned by friends. All of them agree that their favorite animals to judge are breeding heifers.

“As a team, when they say you’ve got a set of breeding heifers to give reasons on, we’re like, ‘Oh we’ve got this,’”Burkhart said.

The love for cattle comes from the combined years of experience showing them that all three have. When someone has that experience with showing animals, an eye for what makes them good can develop.

“I think with our experience with the animals, it is just something you naturally start doing at a young age,” Bollum said.

Still, what a person looks for depends on the type of animal they are judging, Burkhart said. The team has been taught to make sure they shift gears to judge an animal on the right characteristics. In addition, contestants have to ignore things like hair color and other factors that are not judging criteria.

As they’ve gone to different competitions over the years, the team has learned to keep track of their judges to try and give arguments that were not only right, but that also were what a specific judge wanted to hear. One of the challenges when they went to Denver was going in blind in terms of judges’ preferences.

Still, no matter what the judge’s preference was, the team needed to be sure it was united in its answers, Burkhart said.

“Our coach John Carol says, ‘Fly together, die together.’ If we all pick the same stuff and that’s what the judge has been picking all day we’ll fly together. But, if we’re all picking the same stuff but that’s not what the judge wanted that day we’re going to die together but being that close together in our scores and in our placings is going to help us in the end,” she said.

The news that they would be going to nationals came when they found out specifically how they did in the state competition. Although they knew they were in the top 5, the team did not know where they stood in that group until the final day.

Once they heard the fifth, fourth and third place finishers called, the team knew they made it to nationals.

In the lead-up to the trip, the team did as much studying and practice as possible before taking a break to enjoy the ride to Denver. Before the competition started, they were able to get more practice.

Burkhart feels that with them being such a small team, they had a lot more opportunities to grow together and have fun. For the three, this will be the only nationals event they can attend as individuals are limited to one trip. As seniors who have been on the team since their freshman year, Bollum and Burkhart felt this was a great culmination of their work.

For Hetzel, the trip was an opportunity to learn and grow even more in the sport.

Results from the competition were not released prior to deadline.

Murder charge dismissed A convicted felon who supplied methamphetamine to an Austin man, then abandoned him in a vehicle as... read more