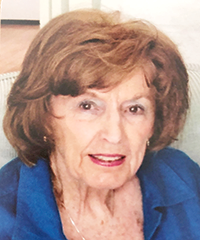 Muryece was born Jan. 10, 1925, to Jay and Caroline Best (Capretz) in Austin. She graduated from Austin High School in 1943. She married Dean Fossey on Oct. 28,1944, in Austin. She was active in the Y Matrons and Our Savior’s Lutheran Church and enjoyed playing golf and bridge. In 1983, Muryece and Dean moved to Edina, where they spent the remainder of their years. Muryece was a dedicated wife, full-time mother, grandmother, great-grandmother, wonderful cook and gracious hostess.

A private family service will be held at a later date at Worlein Funeral Home, 1801 Fourth St. NW, Austin, MN, 55912. In lieu of flowers, memorials may be directed to Avera at Home Hospice, 4509 Prince of Peace Place, Sioux Falls, SD, 57103, or to donor’s choice. Worlein Funeral Home of Austin is assisting the family with arrangements. Condolences may be expressed to the family online at www.worlein.com.

Thomas Robert Rosenthal, 53, was taken from us suddenly and unexpectedly on Tuesday, Feb. 4, 2020. Service: A funeral Mass... read more