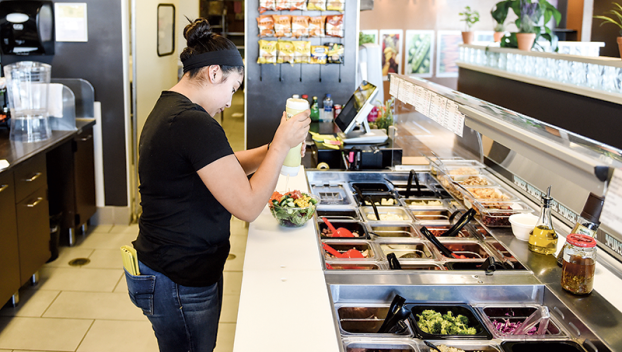 Gabriella Vasquez makes a salad behind the counter of Mixto Fresh Eats. Photos by Eric Johnson/photodesk@austindailyherald.com

Mixing it up: Mixto Fresh Eats opens in Austin

Brothers Israel and Emanuel Gonzalez are hoping to introduce Austin residents to a new restaurant concept with Mixto Fresh Eats, which opened its doors on Tuesday, Feb. 4.

“It’s kind of hard to find healthier food around here,” he said. “With our 1910 Fresh brand, we’re trying to keep the freshness going on as much as possible.”

“This is a concept we had years ago,” said Emanuel, who runs the restaurant. “We’re trying to put something together that makes sense for all of us.” 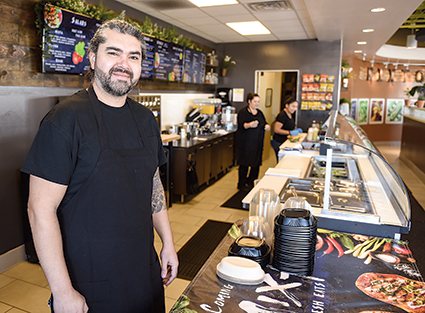 “I love eating; I’ve travelled to a lot of places around the world,” Emanuel said. “Salads were our main starting point, then everything else evolved around that. ’Mixto’ was born out of mixing different items. ‘Mixto’ means a mix of different things.”

“We’re trying to incorporate different styles and cuisines, not only Mexican,” Israel added. “I don’t want to brand this as Mexican food.”

With healthy and hearty options for adults and kids alike, Mixto gives people a chance to be adventurous.

“It’s a little different from what some would expect from a smaller city like Austin,” Israel said. “We’re trying to be innovative with the food.”

“Not everybody will be as open to some of these ingredients as some people in bigger cities; however, we do want to start opening that door so we can have some offerings that you won’t find anywhere else around here,” Emanuel said.

One menu item that has been a hit has been quinoa, available as an option in Mixto’s bowls. 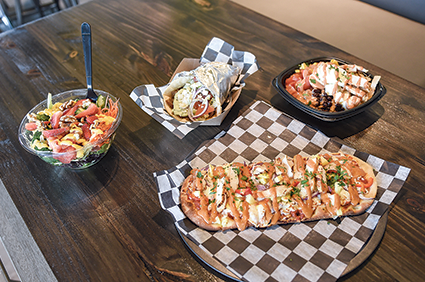 With the change to Mixto, the establishment offers anything from salads to flatbeads and gyros.

“We’ve had a couple of people try quinoa for the first time and they were really surprised,” Emanuel said. “That’s what we want to do — we want to surprise people and open them to new experiences. Some people might find this a little intimidating, but we’re hoping that with time, it will be more appealing to people.”

Israel and Emanuel initially hoped to open the restaurant, located in the old Munch location, last week, but were unable to due to malfunctioning equipment.

“We had to postpone, but we had kind of announced that we were open, so we had people coming in,” Israel said. “It was a little confusing to begin with.”

But now that the doors are open, the overall reaction has been positive.

“We’ve started getting great reviews Facebook,” Emanuel said. “We’re working on our Google Business as well. Most people have been extremely happy and surprised by what they’ve found here. We think we’re going in wthe right direction.”

For those fans of Munch who were disappointed to see it close, there is no need to worry. 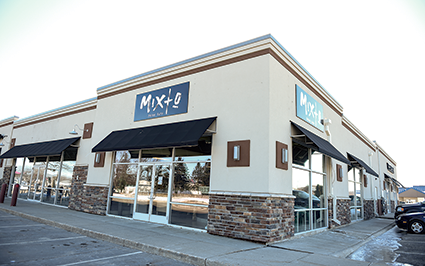 “The idea is to turn (Munch) into a seasonal business,” Israel said. “Originally Munch was going to have food, not just ice cream. For various reasons, we weren’t able to do that in this location, so we decided to make it a seasonal business. Our plans at the moment are to have some of the ice cream at the 1910 locations and we’re looking at getting a mobile unit so we can tackle the fairs and special events. If we find the right location, we’ll re-open.”

Mixto is located at 803 18th Ave. Their hours of operation are 11 a.m. to 8 p.m. Monday through Thursday and 11 a.m. to 9 p.m. Friday through Saturday, though Israel and Emanuel said those might change when they begin selling beer and wine on premise.

“If you’re trying to live a healthier lifestyle, that’s one of the reasons you should stop in here,” Israel said. “We’re introducing a lot of bold flavors; some would say adventurous. If you want to try something different, this is the spot.”

Warns that time is running out to find a fix By Tim Nelson MPR News/90.1 FM Rural America is struggling more... read more