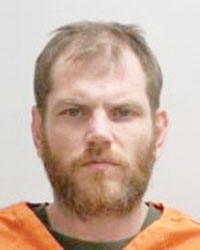 According to the court complaint, a Mower County Deputy was on routine patrol at about 1:37 p.m. on Jan. 28 when he spotted a vehicle that appeared to be stuck in a ditch on 767th Avenue at Lake Louise Park in LeRoy Township. When approached the vehicle, he saw it was a 2005 GMC Yukon, perpendicular to the road and halfway in the ditch, and that it was still running with the lights on.

The deputy approached the vehicle and saw the driver, Hill, making movements toward the floorboard, as if concealing something. It appeared that Hill passed something to Ashley Kay Laudenbach, 22, of Rochester, who was sitting in the vehicle’s back seat. The deputy made contact with Hill, who initially shielded his face and would not respond when the deputy spoke to him. Hill then told the deputy the vehicle “got stuck” and “a friend” was going to “pick up a truck.”

Hill said he did not have identification on him and said the vehicle belonged to “Sarah.” Laudenbach told the deputy the vehicle’s owner was “Sarah Jones.”

The deputy noticed Laudenbach was sitting on the folded back seat and there were several piles of clothing and other items all around her. The deputy spotted and unsheathed hunting knife, a whiskey bottle and two pens that appeared to have been used as smoking devices in the third row seats.

The deputy noticed Hill’s eyes were red and watery and that he could not keep still. He then had Hill and Laudenbach step out of the vehicle. Laudenbach said she did not have identification, but identified herself, while Hill claimed he was “Christopher Daniel Hill” and that he had recently arrived from Georgia. When asked who else was with them, Hill said “Sarah Jones,” whom he claimed had gone to get a truck.

The deputy detained Hill in his squad car as he spoke to Laudenbach. She said Hill was a friend, but she had not met him that long ago. When asked about “Sarah Jones,” Laudenbach claimed she was from either Hayfield or Chatfield. She indicated Hill had been driving the vehicle when they went off the road and that “Sarah” had been picked up by another vehicle 20 minutes earlier.

The deputy searched the vehicle and found two methamphetamine pipes, a pill container (with the patient’s name scratched off) with 31 clonazepam pills and two plastic containers with methamphetamine residue.

During the search, the deputy learned the vehicle had been reported stolen out of Olmsted County.

The deputy again questioned Laudenbach, who said “Sarah” had picked her and Hill up in the GMC and they had driven to Riceville, Iowa. There, she claimed they stopped at Dollar General and the residence of “Sarah’s aunt” and drove into the park on their way back to Rochester. She indicated “Sarah” had been driving.

When asked about the drugs and paraphernalia, Laudenbach said they did not belong to her and the pills belonged to “Sarah.” She denied knowing the GMC had been reported stolen.

The deputy then spoke to Hill, who said “Sarah” had messaged him on Facebook and had picked him and Laudenbach up. He claimed to have met “Sarah” at a “sober house” in Chatfield and said she was driving when the vehicle got stuck in the snow. He said he was in the driver seat when the deputy arrived because he was trying to see if he could get the vehicle free. He indicated that he was not aware they had travelled to Iowa.

A Mower County sergeant who arrived on the scene learned from Laudenbach that there was no “Sarah Jones” and that she was aware the vehicle was stolen. Hill denied stealing the vehicle.

While speaking to Hill, the deputy believed Hill was under the influence of drugs. He had Hill perform four field sobriety tests, three of which he failed. The deputy was granted a search warrant to obtain a blood or urine sample from Hill, but Hill refused to provide either.

A review of Hill’s criminal record shows prior convictions for theft and possession of stolen property.

Hill will appear in court again on Feb. 10.

By Garrett Stadsvold for the Austin Daily Herald The American Cancer Society has released an update for Mower County in... read more