Lay one on me: Students raise $1,300 to fight cancer (and see their principal kiss a goat)

Students at Woodson Kindergarten Center were rewarded for digging into their piggy banks and raising $1,302.85 for Paint the Town Pink by getting to see their principal kiss a goat.

The money was raised over the first week of February and consisted mostly of pennies.

Every day, the kids brought in at least $200 in pennies, with some carrying them in bags, coffee cans and even backpacks.

The fundraiser exceeded the school’s goal of $900.

On Friday, there was a series of events, including watching Principal Jill Rollie give Thanos the fainting goat a kiss.

Thanos was brought to the school by Dawn Carlson, owner of Hawkeye Farms, which raises the fainting goats for sale as pets.

He was not the first goat from the Carlsons to come to school. When Carlson’s daughters were students, they would bring goats in for show-and-tell, which led to Administrative Assistant Lisa Bellrichard contacting her when the school needed a goat for the program.

However, Thanos was almost unable to make it. 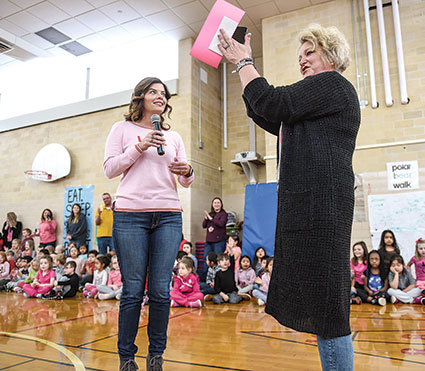 Kathi Finley, director of Paint the Town Pink, applauds the efforts of students after being handed the check for $1,302.85

Last year, when he was only a few weeks old, Thanos was one of two goats that survived a barn fire which killed 45 members of Carlson’s herd. A year later, Thanos has been trained by the Carlsons to be very friendly toward humans and even bleated into the microphone a few times for the students.

While in previous years, Rollie had just died her hair pink following the penny drive, last year things were changed up by having her kiss a pig.

She still isn’t quite sure how they ended up with her kissing an animal, but the school wanted to encourage kids to donate.

“We thought we would give some extra incentive to bring some energy to raising money for a good cause,” Rollie said.

This year, the students were very excited for the event. 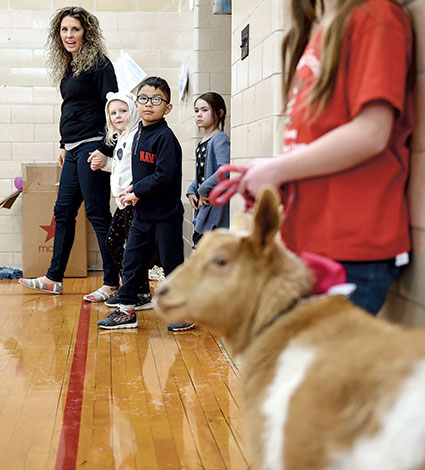 Students check out Thanos the goat as they enter the Woodson Kindergarten Center gym Friday afternoon.

“Are you ready for Mrs. Rollie to kiss this goat?” Rollie asked the approximately 400 students assembled in the school gym.

Rollie was very proud of how much money the students raised.

“I think this is an example of how tiny contributions can make a big a change,” she said.

Paint the Town Pink Director Kathi Finley said it was important for the kids to get involved in  the community. Schools in Austin have done a great job contributing toward the Paint the Town Pink campaign, which raises money for cancer research, she said.

“All of the schools have been onboard and just done a fantastic job,” Finley said.