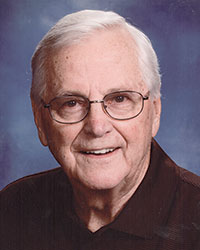 The son of Ragnvald and Gladys Bergeson, Hal and his two brothers were born in Chicago, Illinois, where he was an Eagle Scout and standout athlete on the Foreman High School baseball and football teams. Hal joined the U.S. Army following his first semester at St. Olaf College, Northfield, Minnesota. After his tour with the 25th Infantry Division in Japan, he returned to St. Olaf to complete his education. His college athletic feats were recognized by his enshrinement into the St. Olaf Hall of Fame in 2001. While at St. Olaf, Hal met the love of his life, Beverly Carlson, who would be his bride for 59 years until her passing in 2010.

In 1957, Hal and Bev moved to Austin, Minnesota, where he was a teacher and coach. In 1965, he transitioned to work for World Book.  After receiving a promotion in 1972, the family moved to Wisconsin Rapids, Wisconsin, leaving many dear friends. But Hal and Bev quickly fell in love with their new state and terrific new friends. Hal loved to play golf, tennis, boat and ski, but most of all he enjoyed sharing the beauty of Wisconsin at the family’s home on the Wisconsin River, which was fondly known as “Grandma Camp” by Hal and Bev’s many grandchildren.

Hal moved back to Minnesota in 2018 to be closer to two of his sons.  Ever the competitor, he relished his weekly Bingo nights.

Hal was a tremendous husband, father, grandfather and role model with an incredibly optimistic spirit. Every day was a “great day for the race…the human race.” He was the consummate “people person” who always had a story to share or an ear to listen. He was also very humble and would not have been comfortable discussing the accomplishments mentioned herein. Most importantly, he was a man of faith who has now been rejoined with his beloved Bev.

Hal is survived by his sons, Steve (Lynn), Dave (Gwen), Jim (Jody) and Tom (Pam); 11 grandchildren; and 13 great-grandchildren. He was preceded in death by his wife, Beverly; and his brothers, Bob and Norm.