Now Queensland is hoping to keep up her level of play at the next level as she signed her national letter-of-intent to play basketball at Division III Gustavus Adolphus in Legacy Gym Friday.

Queensland has scored over 1,000 points in basketball, she finished with over 1,000 kills in volleyball and she’s won two state titles with the GMLOKS 4 x 200-meter relay team, but she cemented her future in basketball when she picked Gustavus, which was one of a few MIAC schools she was considering.

“I like the coaches and the girls on the team. I really felt that I could fit in well with them,” Queensland said.

Queensland is the daughter of GM head girls basketball coach Ryan Queensland and she’s put in a lot of time in the gym with and without him. She has spent her summers lifting weights and she gets in the gym whenever she can. 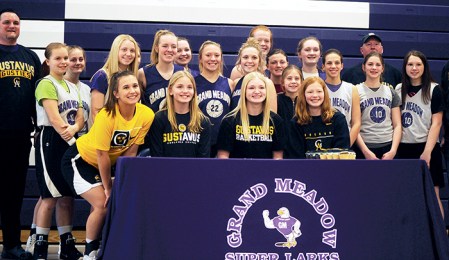 Grand Meadow’s Riley Queensland was joined by her teammates after she signed with Gustavus in GM Friday. Rocky Hulne/sports@austindailyherald.com

“My work ethic has helped me a lot,” Queensland said. “Track is a great sport to help me get in shape. It’s helped me get quicker and faster.”

Queensland has played virtually every position on the court with the Superlarks as she’s athletic enough to play in the paint and skilled enough to handle and shoot the ball outside.

“It definitely helps playing different positions. I’m going in with a lot of experience in different areas,” Queensland said. “It’ll be a lot different (next year). I love having my dad as a coach. It’ll be a change for me, and I think that’s OK.”

Queensland is following the path of her former teammates Skylar Cotten, who now plays at Bethany Lutheran, and Jordyn Glynn, who plays at the University of Saint Thomas. Glynn, who will be a sophomore next year, is likely to match up against Queensland next year as Gustavus and St. Thomas are both currently in the MIAC.

“I’m really excited. It should be a fun time playing against Jordyn,” Queensland said. “She’s a great player on a great team and it will be a great experience.”

Queensland signed the letter less than 24 hours before the Superlarks (18-9 overall) will tip off in one of their biggest games in school history when they take on No. 3 seeded Fillmore Central (20-8 overall) in the Section 1A semifinals in Mayo Civic Center at 1 p.m. Saturday. GM beat FC 44-42 on Jan. 30.

“We’re just looking to control what we can control. Fillmore is a good team, but we’re just going to play our game,” Queensland said.

The Gusties had a record of 18-9 overall this season.