Christian Jacobsen of the GMLOS wrestling team, right, handles an opponent in practice in Grand Meadow Wednesday. The Bulldogs will compete in their first Minnesota Class A State Wrestling Meet since 2005 next week. Rocky Hulne/sports@austindailyherald.com

Full of grit and grind: GMLOS Bulldogs are back in the state wrestling meet

GRAND MEADOW — If it was a Friday night in the fall, there is a good chance that Grand Meadow junior Daniel Smith would be doing everything he could to keep Southland junior Noah Sayles from winning, but when it’s wrestling season, Smith and Sayles are intense partners in practice and strong supporters of each other on match days.

That attitude has paid off this season for Grand Meadow/LeRoy-Ostrander/Southland as the Bulldogs have clinched their first trip to the Minnesota Class A State Wrestling Team Meet since 2005.

Smith, a 160-pound junior, also played on the state qualifying Grand Meadow football team this past fall and he’s thrilled to be competing in his second straight state completion this winter. No. 5 seeded GMLOS will take on No. 4 Blue Earth at 9 a.m. in Xcel Energy Center in St. Paul on Feb. 27.

“It’s great. We work hard every day, harder than all of the other teams (in our section). We proved that,” Daniel said. “We’re all good athletes and we just come together as a family during wrestling season.”

Sayles, a 170-pound junior, said that the Bulldogs knew this could be a good year as the team is loaded with a strong junior class. The success the team has achieved has helped bring the three school districts that make up GMLOS closer together.

“With wrestling, it brings all of the people from the different schools together. Everybody supports everybody. We all respect each other,” Sayles said. “Our practice room prepares us for the meets, because we have a lot of good guys on our team. Having a good practice partner helps a lot.” 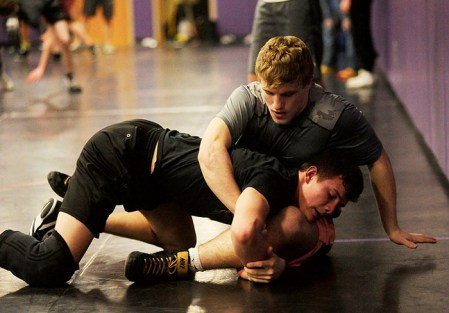 GMLOS head coach Randy Smith said the competitive drive of the Grand Meadow football players has carried over to the wrestling mat and the Southland and LeRoy-Ostrander wrestlers have matched that mentality.

“The team is very united on and off the mat. They’re friends outside of wrestling,” Randy said. “They’ve stuck together and picked each other up and that’s what kind of got us through those duals (at sections).”

Grand Meadow junior Christian Jacobsen, who wrestles at 152, was thrilled to finally score wins over Dover-Eyota and Chatfield in the Section 1A Tournament. He’s pumped to wrestle at state next week.

“I’m glad we finally did it. This team has been working hard since our sixth grade year. We keep working towards every opportunity we get and we’re happy for it,” Jacobsen said. “We all have to be on the same page. It takes a team effort. We can’t give up those bonus points and we have to keep what we can keep and get what we can get.”

The entire Minnesota Class A State Team Tournament will be held on Feb. 27. The semifinals are set for 1 p.m. and the finals are set for 7 p.m. LPGE-Browerville is the top seed, Atwater-Cosmos-Grove City is the No. 2 seed and Tracy-Milroy-Balaton/WWG is the No. 3 seed.

Randy is hoping the Bulldogs leave their mark on the competition.

“Our goal will be to make the podium this year and climb the ladder as high as we can get,” he said. “We want something to build on for next year.”

GMLOS will compete in the individual Section 1A Wrestling Tournament in Rochester on Friday and Saturday as it looks to advance some of its wrestlers to the individual state meet.

GMLOS has four wrestlers ranked in the top-10 in Class A by the Guillotine.

152: Junior Christian Jacobsen is ranked No. 7. 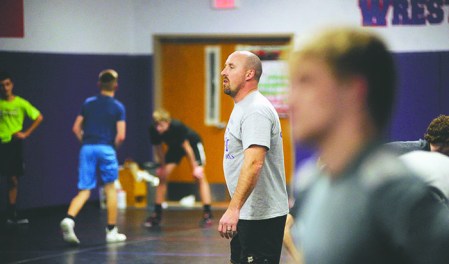 Austin freshman Claire Raymond has most likely attended more state gymnastic meets than the majority of gymnasts in Minnesota, but... read more