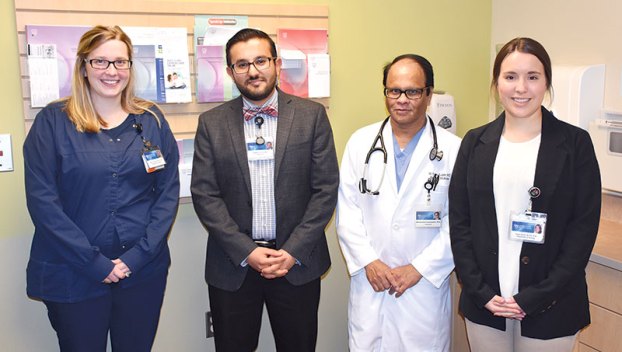 A new study of heart attack and heart failure survivors shows that while high cholesterol can cause heart disease, it can also mean less chance of non-cardiovascular diseases like kidney disease, pneumonia and cancer.

The study was authored by Drs. Mohammed Yousufuddin and Hossam Al-Zu’bi, along with nurses Taylor Doyle and Jessica Peters of Mayo Clinic Health System-Albert Lea and Austin.

Yousufuddin said the reason the study started was that the team was looking at a number of factors and the effects they had on the risk of death in patients.

While the connection high cholesterol, otherwise known as hyperlipidemia, had in increasing the risk of heart disease in the general population has been known for years, it was not known what effect it had on the mortality rate of people who already had had a heart attack or other heart disease, Yousufuddin said.

“What our study adds is that after acute myocardial infarction (a heart attack) or heart failure hospitalization, hyperlipidemia was associated with a lower risk of death,” he said.

In total, there was a 24 percent less likely risk of death for patients with hyperlipidemia than those without it, and that was true across gender, ethnicity and other factors, including whether or not the patient was taking cholesterol lowering statins.

The health effects of those drugs were independent of whether the patient had hyperlipidemia, Yousfuddin said, because the drugs have a number of different effects. Dr. Al-Zu’bi said one theory on that is that the statins also are anti-inflammatory.

“The cells in the body and in the heart are stronger because the inflammation is less,” Al-Zu’bi said.

The two-year study began in 2016 with the team looking at the data on 23,397 patients, including about 4,000 pairs of heart attack and 2,000 pairs of heart disease survivors who had an individual who was essentially identical to them, other than one person had hyperlipidemia and the other did not.

The data came from patient records dating back to 1996.

Although many health systems in the United States do not keep the records on patients necessary for a study like this, Mayo Clinic does, which allowed researchers to conduct the study.

“The Mayo Clinic has a very good track record of keeping patients’ records,” Yousufuddin said. “That’s not possible in other centers.”

The team combined its data with that from nine similar studies through meta-analysis, which supported the findings.

When other doctors look at the study, the quality of the data gives credibility to the results, Yousufuddin said.

Initially, these results were surprising, but after more research from previously released studies, the results made more sense, according to Yousufuddin and Al-Zu’bi.

Theories for how this could be include that cholesterol binds with parts of the bacteria and kill it and that it helps build stronger cell membranes, they said.

The hope for this study is that it leads to more related research on cholesterol and other issues. In addition, it could be used to get doctors to move away from completely drastically lowering cholesterol levels in patients who have had heart disease, as it could put them at risk for other conditions.

For nurses like Doyle and Peters, having more information about this issue is helpful when they are talking with patients and their families.

The study has been published in the British Medical Journal and the team has discussed the issue with providers around the world, including when Peters and Doyle presented preliminary results to the American College of Cardiology in Orlando in 2018.