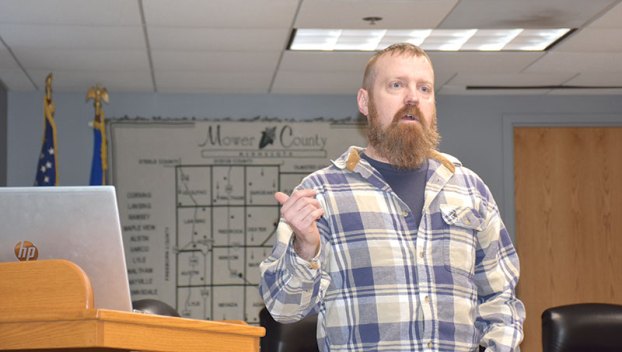 Veterans Court Coordinator Preston Selleck spoke with officials about the program during a meeting at the Mower County Government Center, Thursday. He has served both in law and the military. Tyler Jensen/tyler.jensen@austindailyherald.com

For veterans who find themselves in legal trouble, there is now an option in Mower County to get help.

As part of an effort by the regional judicial district, Mower County and others in the area now have a veterans court, which those who have served can enter if they are facing charges.

While the individual would still go through the regular court system, they would be part of the program, which helps them deal with issues unique to veterans, find services they are entitled to and gives them a support group of people like them.

The program serves as an additional layer of work with individuals already going through probation.

Major Preston Selleck of the United States Marine Corps, who is also an attorney, is the coordinator for the program. He discussed the program with local officials at a lunch Thursday.

He served in Afghanistan and met individuals who were serving upwards of seven combat deployments in about 10 years.

Ideally for Selleck and others, the veterans court is serving people who had no issues before they went into the service, but after multiple deployments to combat situations or just the stresses that come with life in the military, problems like DUIs, domestic disputes and/or drug use begin to pop up.

There are currently about 20 veterans in the program with space for 30. None of the veterans currently live in Mower County.

One of the ways the program helps is by connecting veterans to services at the Department of Veterans Affairs. To help with dealing with the VA, two workers from the agency work with the program. One case this helped with was when a veteran was not getting medication to help treat a mental health condition. The coordinators called the agency up and made sure he had the medication the next day, Selleck said.

Another way this program helps is that veterans can get help either getting disability pay or help with skills to get a new job.

Finally, there is a positive peer pressure aspect to the program, Selleck said. When an individual was only days away from taking the next step in the program, he called officials and let them know he had relapsed and used drugs again.

“The idea of brotherhood and camaraderie does present itself within our system,” he said.

The consequences for breaking rules of the program can range from getting yelled at by doctors and officials to spending time in jail. The county attorney’s office is notified if the individual fails out of the program.

Most veterans in the system are doing well, Selleck said.

Steve King, Director of Correctional Services at Mower County, said that although the county was encourage to participate by the district court, it is an easy program to be in as it does not cost the county anything.

Having people get treatment for issues like drug use is very important as that is one of the root causes of many crimes the courts see, he said.