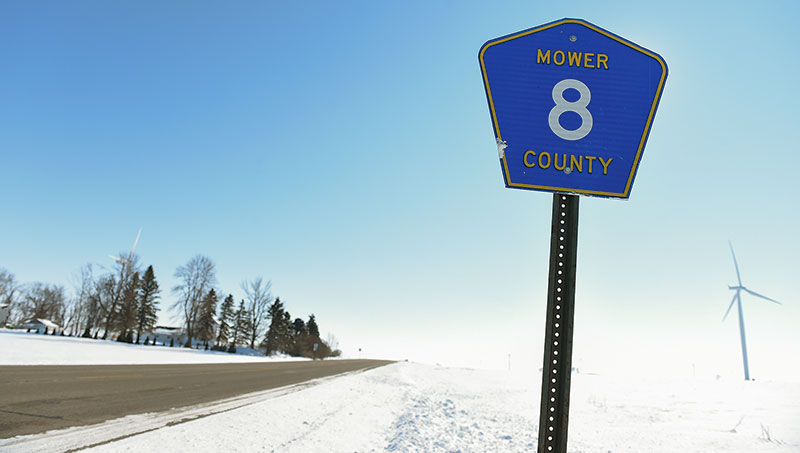 The Mower County Commissioners on Tuesday approved a permit for a new transmission line by Dairyland Power. Eric Johnson/photodesk@austindailyherald.com

A new power transmission line to be built by Dairyland Power along County State Aid Highway (CSAH) 8 from 210th Street to 130th Street, south of Grand Meadow, has received a conditional use permit from the Mower County Board of Commissioners.

The permit has been in the works for months, but was delayed due to concerns over who would pay if the poles needed to be moved.

Attorney Scott Anderson, who represented the county on this issue, said the poles were planned to be placed 2 feet from the county’s right of way. According to work done by the County Engineer, if CSAH 8 is ever reconstructed, the amount of clear space needed adjacent to the road would be increased to 25 feet to meet state standards.

The original permit draft listed a condition that Dairyland would be responsible for paying to move the poles if the county needed to expand its right of way to increase the size of the road.

Dairyland Power did not agree with that condition.

The new 69 Kilovolt line will be primarily used by the Freeborn-Mower Cooperative and will allow the Co-op to retire three substations, Alyssa Britton with Dairyland Power said during a Planning Commission meeting, according to transcripts.

At Tuesday’s Board meeting, that condition was removed and a new one was added. This condition states Dairyland Power will work to ensure all poles are located at least four feet from the right of way, which should be far enough to accomodate widening the road at some point, and would pay to move any poles it has to put closer than four feet from the right of way in the event of a road widening.

“Your county engineer thinks he can make this work in any future reconstruction as the rules currently require,” Anderson said. “This also gives the applicant the discretion in what makes engineering sense for them.”

He said this agreement seems like a win for both parties.

The Board approved the permit 4-0. Commissioner Jerry Reinartz was absent.