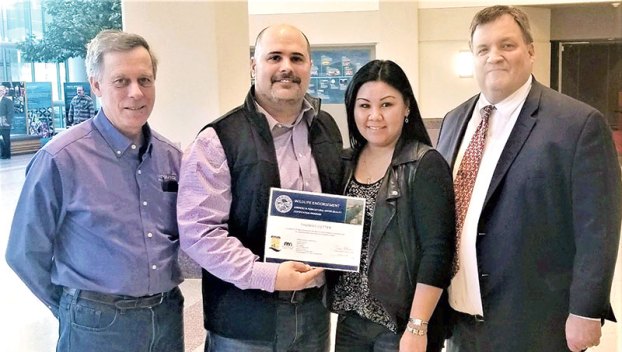 Cotter, the first in Minnesota to get MAWQCP’s soil-health certificate, was one of two people honored Thursday by Petersen for the wildlife endorsement.

The event was a pre-summit to the National Pheasant Fest & Quail Classic, the nations’ largest upland-themed event that is a tradeshow and convention for upland hunters, landowners, bird dog lovers, wild game cooking enthusiasts and wildlife-habitat conservationists. Pheasants Forever and Quail Forever organize the event that runs Friday to Sunday.

Mower SWCD district manager Justin Hanson said it is well-deserved recognition for Cotter, a fourth-generation farmer who has done a lot locally as well as across the state and beyond.

In December, MAWQCP launched three endorsements in addition to the 10-year certification it provides to qualifying farmers and landowners. The endorsements are available to the program’s water quality-certified producers.

Certified producers who achieve an endorsement receive an additional sign for their farm along with recognition for their conservation excellence. Interested producers and landowners in Mower County should contact Mower SWCD.

Cotter, who raises a variety of crops and runs a cow/calf beef operation just outside of Austin, continues to be one of those producers going “above and beyond,” Hanson said, not only on his land but also in public, including given dozens of presentations in recent years to groups of all backgrounds about soil health and cover crops.

In 2016, Cotter and his late father, Michael, were honored as Mower SWCD’s Outstanding Conservationists of the Year. That same year, the Cotters were among four farm families in Mower County to be the first to get certified through MAWQCP, with a recognition event hosted on the Cotter farm.

In 2017, Tom Cotter joined fellow Austin-area farmer Tom Finnegan in doing extensive outreach under a 2017 Cover Crop Champion grant in coordination with Mower SWCD. Both are beef producers who use cover crops on their cropland.

Since then, Cotter annually does extensive outreach focused on cover crops and other soil-health practices, including a winter tour of “Cover Crops 101” classes and other speaking engagements across the state and region. His next free “Cover Crops 101” session is 1-3 p.m. on Tuesday, Feb. 18, at the courthouse in Albert Lea hosted by the Freeborn Soil Health Team.

KSMQ Public Television viewers will soon be able to tune in to programming from the heart of Europe. Beginning March... read more