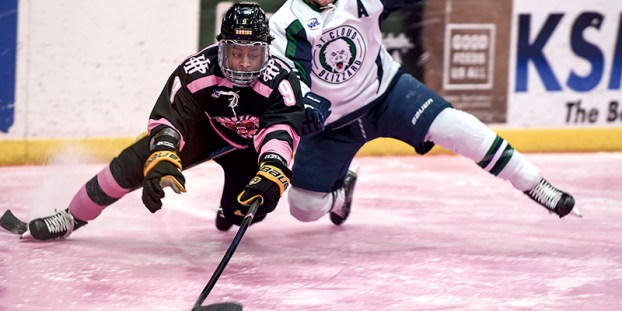 Austin’s Dante Sheriff reaches out of the puck after a collision during the first period of Paint the Rink Pink at Riverside Arena Saturday night. Eric Johnson/photodesk@austindailyherald.com

Bruins win with emotion on Paint the Rink Pink Night

Connor Mylymok has now scored 11 goals in his two-year career with the Bruins, but none of them meant more than the one he scored in the Austin Bruins’ 5-2 win over the St. Cloud Blizzard on Paint the Rink Pink night in Riverside Arena Saturday.

Mylymok, a native of Wilcox, Saskatchewan, scored in the first period of the game to tie things up at 1-1. The goal meant a lot for Mylymok, who is still mourning the loss of his grandma, who used to take him on various family trips.

“It meant so much to me,” Mylymok said of the goal. “I went into this game knowing I was only going to play for her tonight. I played with a lot of emotion and when I was able to get that goal, it hit me deep in my heart.” 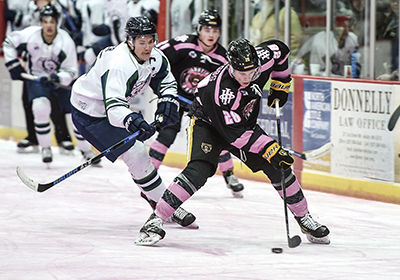 Dante Sheriff, Jed Pietila and Tiernan Shoudy all scored in a six-minute spurt in the second period to put Austin up 4-1.

Pietila, who was playing in his third PTRP game, said it means a lot to play for a great cause like fighting cancer.

“This is awesome. Hopefully for some of these fans that never come out to a hockey game, it makes them think about coming again,” Pietila said. “Hopefully we entertained them. It’s unreal. We’re focused on the fact that it’s not about us. All of the money that we raised to go towards cancer research is unbelievable.”

Brett Miller stopped 30 of 32 shots for Austin. Austin head coach Steve Howard said it is time for the Bruins to clamp down and focus on the postseason.

“We were a little loose at times and we can’t afford to be that way right now,” Howard said. “Our playoffs have already started and we’ve got to make the playoffs.” 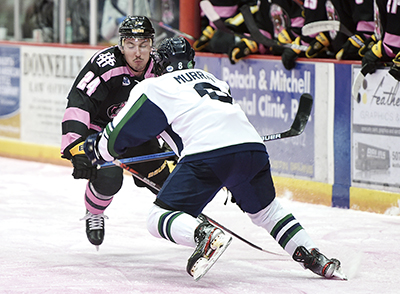 Austin’s Chase Pilawski starts to fight his way through the check of St. Cloud’s Alex Murray during the first period of Paint the Rink Pink at Riverside Arena Saturday night. Eric Johnson/photodesk@austindailyherald.com 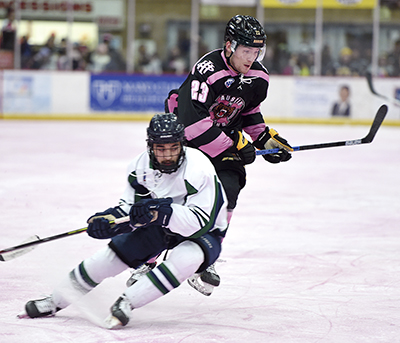 Austin’s Connor Mylymok cuts behind on the way to the puck during the first period of Paint the Rink Pink at Riverside Arena Saturday night. Eric Johnson/photodesk@austindailyherald.com

3,000 games and counting, this official still loves the game