Bringing a scare to state: Packer dance team is ready to wow the crowd at 18th straight state meet

The Packers have brought plenty of grace and skill to the dance floor this season, and they’ve also brought a few scares.

Austin has used a routine that has the Packer dancers dressed as clowns, who aren’t necessarily the happy kind. The performance has caught plenty of attention throughout the season and it was also good enough to get the Packers into their 18th straight Minnesota Class AA State Meet in Target Center.

“We’ve had lots of kids crying in the background of the competitions,” Austin senior captain Kaitlyn Goligowski said of the team’s routine. 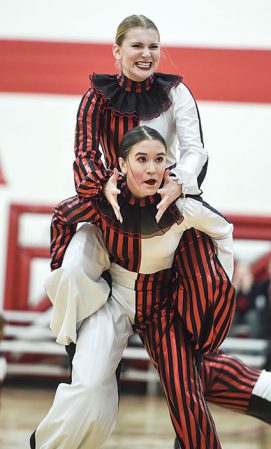 Last season, the Packers finished 11th in jazz and fifth in high kick.

“We’re obviously very, very excited,” Austin senior captain Ellie Eyre said. “We’re very fortunate to be one of the 12 teams to go to state. Our goal is to make finals first, but the drive behind is it to medal at state. We want to do something that we’ve never done before.”

The Packers have plenty of experience on the big floor, but they’re not taking this opportunity for granted. The team is as ready as it has ever been, according to junior captain Paige Leibeg.

“Our mindset has to be as strong as every other year,” Leibeg said. “We go into every season knowing that nothing is guaranteed and we have to work just as hard as the last year. We have to keep pushing hard to make our goals happen.”

The Packers have put in a lot of work this season, but they still have strong winds in their sails. On Wednesday morning, the team was fully focused in the midst of a gruelling practice.

“We’ve been focusing on going hard in practices and staying intense,” said Austin junior captain Briella Wempner. “Even though we’re winding down to the end of the season, we’ve got to work hard.”

As for the possible fear their routine might invoke, the Packers are fine with that. They’re doing it their way.

“We wanted to go back to the scary kind of theme,” said Austin senior captain Salma Masood. “That’s what Austin is kind of known for.”

When Austin senior Ellie Eyre moved to Austin 10 years ago and enrolled in Banfield Elementary as a second-grader, she... read more