MINNEAPOLIS – The fourth time was a charm for Austin senior Riley Norton.
Norton finally broke his streak of three straight ninth place finishes at the Minnesota Class A State Diving Meet when he took sixth place at the Jean K Freeman Pool Saturday.
Norton came into the finals in ninth place, but he moved up three spots with three solid dives – finishing with a score of 339.89.
“The three year curse is over,” Norton said. “I saw myself shoot up to sixth place and it was a rush of emotion. I wanted to cry and I wanted to jump and scream. Sixth place kind of concludes it for me.” 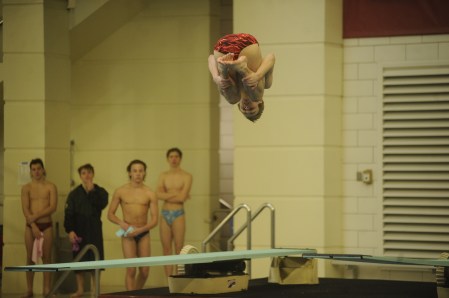 Austin’s Riley Norton completes his final drive for the Packers at the Minnesota Class A State Meet at the University of Minnesota Saturday. Rocky Hulne/sports@austindailyherald.com

Norton was scanning in his phone to follow the scores in between his dives and he felt an immediate feeling of elation when he saw that he was going to make it to the podium.
When it was said and done, Norton’s final dives for the Packers where his best.
“It’s perfectly OK with me,” Norton said. “I’m overjoyed, I kind of feel like I’m going to faint. I’m overwhelmed and I like it.”
Norton said his biggest key to success was coming into the meet with a relaxed attitude.
“A lot of it was mental,” Norton said. “There was a big mental block. Everybody that came to watch and support me told me not to think about it too much.”
Storm Opdahl of Chisago Lakes took first in diving with a 470.15. 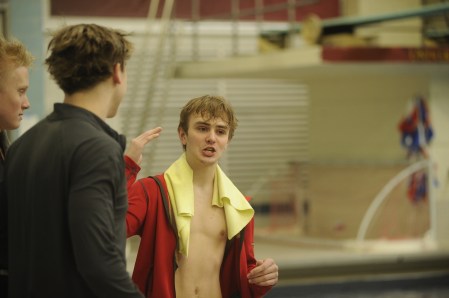 Austin senior Riley Norton speaks to teammate Aaron Knoll after taking sixth in diving at the Minnesota Class A State Meet at the University of Minnesota Saturday. Rocky Hulne/sports@austindailyherald.com

The Austin Bruins started a six-game homestand with a 3-2 overtime win against the Bismarck Bobcats (28-12-4-4 overall) in Riverside... read more