Athletics break the pressure: Lyle-Pacelli controls the pace to pick up a big home win

Lyle-Pacelli’s Cole Walter signals for a timeout after jumping on a loose ball in Pacelli Gym Monday. Rocky Hulne/sports@austindailyherald.com

The pressure was on and the crowd was booming when Cole Walter put his head down and broke the  Truman/MLGHEC full court press for a breakthrough lay-up.

Lyle-Pacelli was back in control.

“As soon as I got past the first kid I just saw a lane so I tried to kick it in the next gear,” Walter said. “There was nobody really there and the big kid came. I just tried to get an ‘And one’ over top of him.” 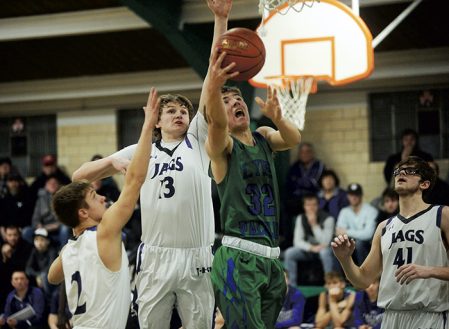 Lyle-Pacelli’s Jed Nelson goes up for a shot in traffic against TMLGHEC in Pacelli Gym Monday. Rocky Hulne/sports@austindailyherald.com

Walter finished with 12 points, four assists and three steals, and he put L-P up 55-44 with five minutes left on the that drive. He controlled the pace for much of the night in the Athletics’ 66-59 win in Pacelli Gym Monday.

“I just try to get the ball down the floor as best I can and I try to create shots for my teammates when they’re open,” Walter said.

The Jaguars (14-6 overall) had a big, athletic lineup but they weren’t able to contain L-P’s front line of Jed Nelson, who had 19 points, and Buay Koak, who finished with 18 points, six rebounds and three blocked shots. Koak capped a personal 7-0 run to put his team up 53-42 with 5:54 left in the game after the Jaguars had pulled to within four.

“I just had to stay relaxed and wait for my turn to get the ball and attack,” Koak said. “I couldn’t force stuff, because each possession is valuable. I had to stay patient. At the end of the games, we just have to stay relaxed.” 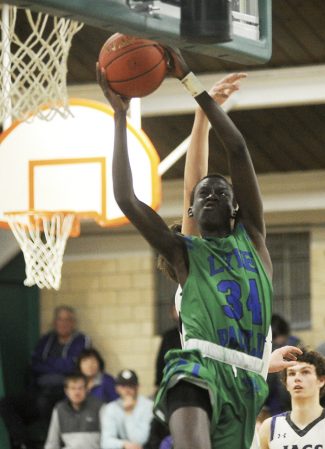