Arthur Allen Sorensen, 85, of Waltham, Minnesota, passed away Tuesday, Feb. 18, 2020, peacefully in his sleep at home. 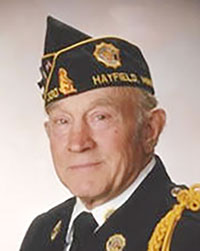 Arthur was born on Feb. 25, 1934, in Corning, Minnesota at home, to Nels and Anna (Fredericksen) Sorensen. He attended Monitor Country School near Dexter, Minnesota.  In 1957 he joined the Army. He went to basic training in Fort Hood, Texas. When he came home from basic training, he married the love of his life, LaDonna Richards on Nov. 9, 1957.  He served in the U.S. Army in Germany for two years.  In 1959 he was honorably discharged and came home to begin farming and start a family with his wife.

In 1972 he moved his family to the farm where he resided until he passed.

Art loved all livestock, especially horses, farming, spending time with family, playing sports with his children and grandchildren, and playing cards, especially 500. You could always be guaranteed he would bid high. Art belonged to the Mower County Mounted Posse and was a member of the Hayfield American Legion and served as commander. He was instrumental in organizing the Hoof Beats Saddle Club near Brownsdale. Art was an honest man who worked hard.  He will be greatly missed by all who knew him.

The funeral service will be at 11 a.m. Saturday, Feb. 22, 2020, with Rev. Ronald Prigge officiating at Our Savior Lutheran Church, 411 West Main Street, Brownsdale, MN with visitation two hours before the service. There will be Military Honors following the service.

Burial will be at a later date.