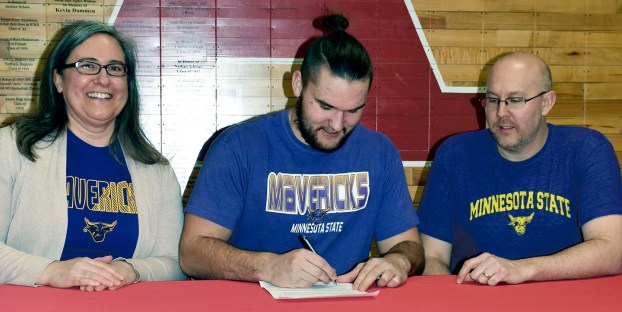 Austin senior Oliver Andersen made it official when he signed his national letter-of-intent to play football at Division II Minnesota State University in Mankato in front of his family and coaches at Austin High School Wednesday.

Andersen, a lineman who had 43 tackles, eight sacks and one interception for a TD for the Packers this fall, will receive a partial athletic scholarship with the Mavericks, who finished in second place in the NCAA Division II Tournament this season.

“There is a great amount of relief, but more than that it’s excitement,” Andersen said. “Because of the foundation I built here, I get to move on to the next level and see what more I can build on. I get to go on and play football in college and that’s been a dream of in since I was 12 and found out that there was college football.”

Andersen is the third in a family of six children. His parents met at MSU and his grandpa and great grandpa also attended MSU.

“My family definitely has a lot to do with how competitive I am,” Andersen said.

Andersen is projected to play defensive line for the Mavericks and he is also likely to compete for the MSU track and field team. He took sixth in discus at the Minnesota Class AA State meet last season.

Finding a base: Elyse Hebrink leads the Pack with strong paint game

Austin junior Elyse Hebrink stands at just five-feet, six-inches tall but she was holding her own in the paint against... read more