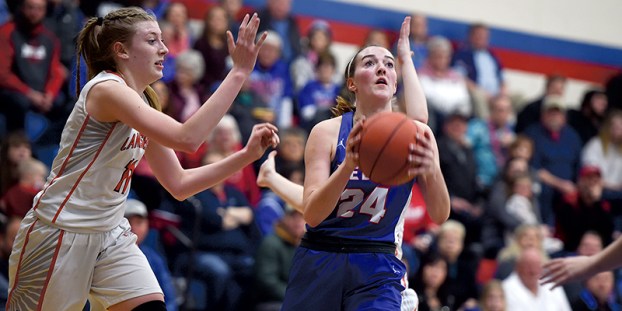 Southland’s Lexi Smith moves to the hoop during the first half against Lanesboro during a Section 1A playoff game Thursday night in Adams. Eric Johnson/photodesk@austindailyherald.com

ADAMS — Southland senior Lexi Smith has had a lonesome run with the Rebel girls basketball team, but it all paid off for her when she led Southland to its first home playoff win in seven years when the No. 7 seeded Rebels bested No. 10 Lanseboro 62-49 in a Section 1A Tournament opener Thursday.

Smith, who has been the lone basketball player in her class ever since she was a freshman on the varsity team, piled up 23 points, eight rebounds, four steals and two blocks, to give the Rebels (12-11 overall) a huge boost. Smith knocked back-to-back threes to put her team up 37-23 early in the second half in what was her last ever competition in Southland High School.

“I knew this was it no matter what. I really wanted to win,” Smith said. “The beginning of the first half was a complete blur, but it all came to me at halftime. The second half was the slowest half of my life and I watched every second tick down at the end.”

Southland head coach Dean Bendtsen said Smith has been very influential player to his team, which has just four juniors and a vast amount of underclassmen. 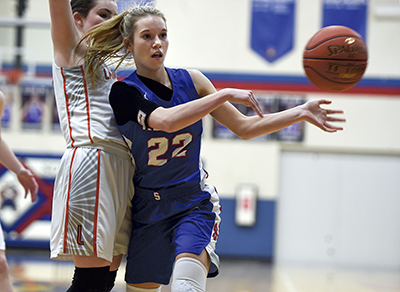 Southland’s Larissa Goslee kicks out off of a drive in the first half against Lanesboro during a Section 1A playoff game Thursday night in Adams. Eric Johnson/photodesk@austindailyherald.com

“She’s been our rock. She’s here at every practice and she sleeps and breathes basketball,” Bendtsen said of Smith. “When you’re trying to keep a program going with low numbers, it really helps to have someone like her. She’s bled basketball for six years and she’s had a lot of playing time since she was a freshman.”

The Rebels had lost seven straight games before closing the regular season with a win over Chatfield. Southland came out with plenty of energy against the Burros (9-18 overall) as it led 9-1 early on.

Kayla Nelsen scored five of the first seven points of the game for Southland as she finished with 16 points and four steals.

“We really got it going against Chatfield last week. We got our momentum back in that one and got back in our groove. We came out pumped for this one,” Nelsen said. “Lexi’s a great leader and she really helped us out a lot. She pushes us to be better and we push each other to be better.”

Lanesboro scored the last seven points of the first half to pull within 27-18 at the break, but it never got closer than six.

Southland will play either No. 2 Fillmore Central or No. 15 Faribault Bethlehem Academy at Rochester Lourdes at 6 p.m. Monday.

“We’re going to give it all we’ve got,” Nelsen said. 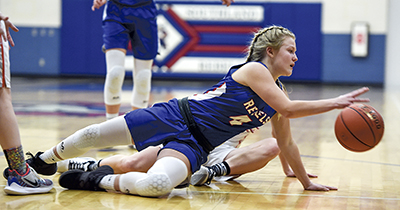 Southland’s Katelyn McCabe dives after a loose ball in the first half during a Section 1A playoff game Thursday night in Adams. Eric Johnson/photodesk@austindailyherald.com 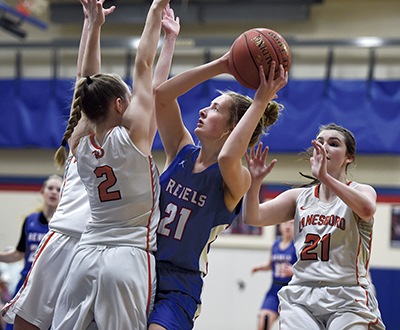 Southland’s Bailey Johnson posts up under pressure against Lanesboro during a Section 1A playoff game Thursday night in Adams. Eric Johnson/photodesk@austindailyherald.com