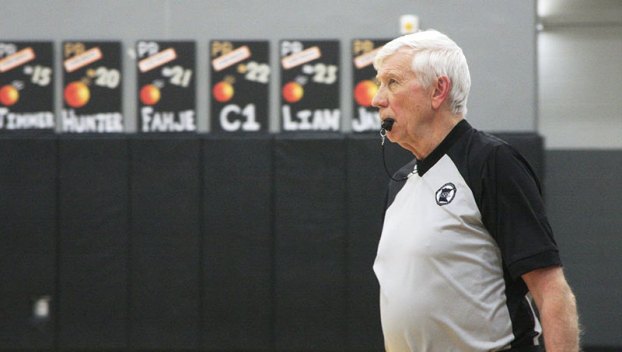 3,000 games and counting, this official still loves the game

John Klinnert doesn’t exactly remember why he decided to become a referee more than 40 years ago.

“I suppose I figured I could do better than some of the refs that I had,” he said with a chuckle.

He officiated his first basketball game in 1977, and last year stepped onto the hardwood with his whistle for the 3,000th time. He works high school basketball, a few college basketball games and some football games in the fall.

That’s a lot of miles and a lot of late nights.

Klinnert is still adding to those stories. At a time when many officials quit after a couple of years, he has no plans to step off the court.

Enforcing the rules of the game was a natural progression for Klinnert, a five-sport athlete at New York Mills High School, who went on to be a coach and school administrator for 18 years. He now operates JK sports in Fergus Falls, selling sports gear.

At 72, the lanky, white-haired Klinnert is slowing down a bit, at least by his standards. He wants to be a fan when his grandchildren play basketball, so he’ll only referee about 30 games this winter.

“The highest I ever worked was 93 games in a year,” he said. “I remember having one stretch where we worked 17 times in 16 days.”

A Minnesota State High School League official said 30 games is about average for basketball referees — roughly two games a week during the season, which stretches from late November to early March.

Klinnert gets paid about $125 for working two games a night, part of an ever-changing crew of three officials.

After 43 years of pounding up and down the hardwood, Klinnert insists he still gets excited for every game. He estimates he’s officiated about 85 tournament finals, winner-take-all games with fans packed to the rafters and tension filling the gym like a fog.

“And when you walk out there, boy, I get the shivers even thinking about some of those games, because it’s a feeling,” he said.

One of those games, back in 1983, stands out. It was a five-overtime final in Crookston to decide which team would go on to the state tournament.

“Littlefork-Big Falls beat Ada, and the ball hung on the rim — and fell off,” he said. “Otherwise Ada would have gone to the state tournament.”

Like many high school officials, Klinnert does the job because he loves the game.

“Because if you’re reffing only for the $100 bill, you will not last. You will not last,” said Klinnert. “The day that I’m not excited to go to a game, I should call it quits.”

Fewer and fewer people are willing to make the commitment. More young officials only stay for a couple of years. A national survey in 2017 of all levels of officials in all sports found 70 percent quit after three years.

“Retaining the officials has become the challenge,” he said. “What’s happening in officiating now is there are sportsmanship issues, there’s jobs, there’s family, there’s low rate of return in terms of the stipend you receive. Those are all things that are driving officials away. They’re saying, ‘This just isn’t for me.’”

Leighton insists there’s no shortage of officials in Minnesota, even though in the past year, a few basketball and football games have had to be rescheduled because no referees were available.

Still, he admits more officials are putting limits on their commitment to the sport — which can put a strain on scheduling.

Klinnert likes working with younger officials, sharing tips and tricks for managing the game. He has routines for every part of the game, so he doesn’t lose focus.

But he has no sympathy when a younger official complains about the long drive, or the late night.

“I tell them point-blank: ‘Get rid of that attitude,’ ” he said. “For these kids it’s the biggest game in the state of Minnesota tonight. If you don’t feel that way, then don’t referee.”

Klinnert is a throwback, and he’s proud of the long hours and lost sleep.

“Old referees, on the way home we’re talking about the game,” he said. “And young referees in some cases don’t even know if they played a zone or if they played man to man. The game is over and now let’s go see what’s on Facebook. That’s a difference.”

Over four decades, he can’t remember many times he’s turned down a chance to work a game.

“I took off for my 50th wedding anniversary. I took that night off,” he said.

But the demands of refereeing — late nights, nominal pay and lots of travel — can take their toll. And there are other challenges, too: Being yelled at by coaches turns off a lot of officials, and Klinnert said he sees that mostly in his younger colleagues. That observation is supported by national surveys, which have found that abusive treatment by coaches, players or fans is the top reason officials quit.

Klinnert said that might be changing. In recent years, he’s seen more respect from student athletes. After games, they often thank him and his referee team for their work. In 2015, the Minnesota State High School League started a Thank A Ref program, encouraging schools to let officials know they’re appreciated.

And over the years, Klinnert said, he’s also gotten a bit more tolerant of coaches yelling at him.

“Take a deep breath,” he said. ”Sometimes you just stand there and let him let them rip you and then walk away, it’s all part of the game.”

Klinnert said he’s never ejected a player from a game, and he’s tossed out only one coach, after a last-second call during a college tournament game.

“He came out onto the court and I won’t say exactly … what he told me, but I had to evict him from the game,” he said. “And they had to hold him down after the game.”

It was a few years before he saw that coach again, but before their next game together, they shook hands and put the confrontation behind them.

Klinnert stands by that controversial call. But he acknowledges he does sometimes blow a call. When it happens, he always calls the coach later to apologize.

For the last several years, about 15 to 20 high school officials have reached the 40-year mark.

Only a handful mark a half-century of officiating each year.

As long as his knees hold out and he still feels that ripple of excitement before every game, Klinnert has no plans to hang up his whistle.

“How long will I ref? I don’t know. I tell people I’ll ref until I ref my last game.”

ST. PAUL — The trial of an Illinois militia leader accused of being the ringleader in the 2017 bombing of... read more