The Riverland Community College women’s basketball team put up a good first half fight, but ended up losing its ninth straight game when it fell to Western Technical College 97-62 in Riverland Gym Wednesday.

The Cavaliers (14-4 overall) seized control early in the third quarter when Caitlin Young knocked down four straight three-pointers in four minutes to put WTC up 61-38 with 3:44 left in the quarter.

“They’re probably going to end up winning our division this year and we were down only 10 at halftime and that’s a great spot to be in,” RCC head coach Andrew Kaiser said. “They stuck with us on rebounds and we had been out rebounding every team.”

The Blue Devils (2-11 overall) started the game on a high note as they led 11-5 early on. RCC also held an 18-17 lead going into the second quarter, but the turnovers eventually piled up as the Blue Devils couldn’t stay in a rhythm.

With just seven players on the active roster, RCC had to ride it’s starters. 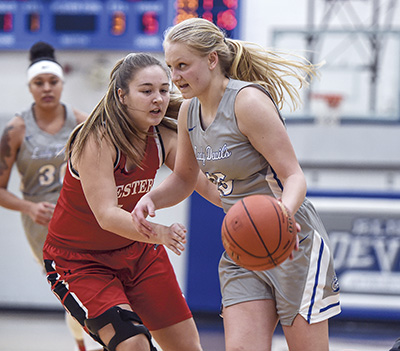 “We’re progressing still and we’re not plateauing or falling. I see it every day in practice,” RCC head coach Andrew Kaiser said. “Progression is good, rather than falling down or rolling over. We’re right in it with most of our games. We have the talent and it’s just the fatigue factor and our numbers don’t help at all. It’s all positive for me and we’re going through the process right now of year one and I’ve still got the back of every one of the girls on my team.” 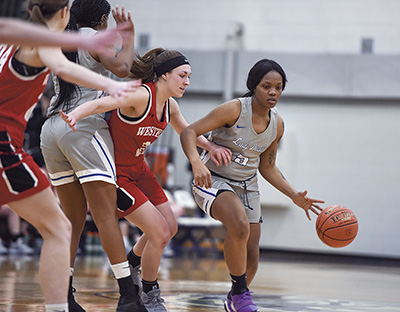 Riverland’s Cynthia Harmon-Robinson dribbles around a knot of players during the second half against Western Technical College Wednesday night at RCC. Eric Johnson/photodesk@austindailyherald.com 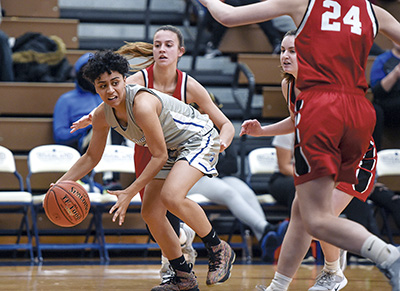 The No. 8 ranked Riverland men’s basketball team rolled out to a fast start and didn’t look back when it... read more