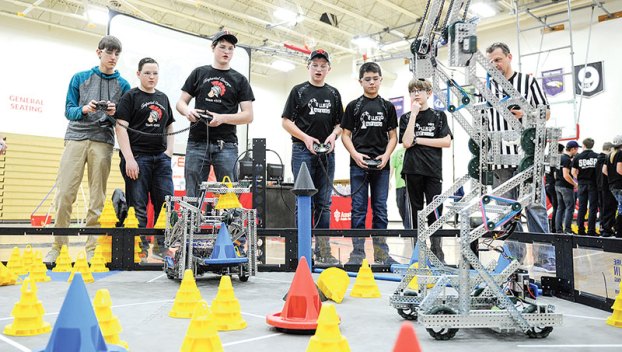 Several hundred middle and high school students, and their mentors, from around Minnesota will unite at  Austin High School on Saturday for the 2019-2020 VEX Robotics Competition game, Tower Takeover.

The tournament will feature more than 75 teams, who will compete with and against other schools in a series of back-to-back robotics challenges, made possible by sponsors including the Hormel Foundation, Austin Rotary, IBI Data, and Hormel.

Participants will compete for the title by strategically executing Tower Takeover, where the competitors will guide robots they designed, built and programmed using VEX EDR.

Tower Takeover is played by grabbing and moving plastic cubes, stacking the cubes in goals, and placing cubes in towers of varying heights. 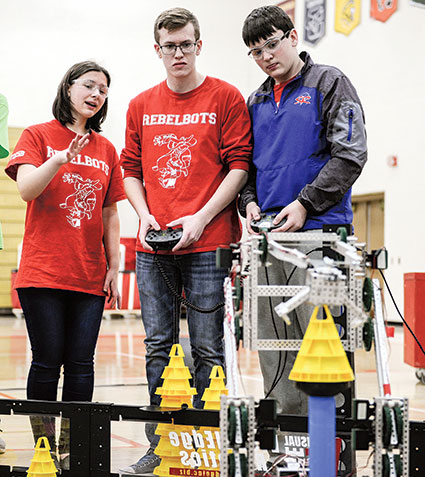 The Southland team of Rebelbots, including Ava Wilde, Thomas Shaw and Max Schmitz, watch as their robot places a cone during the VEX Robotics Tournament state qualifier in 2018. Herald file photo

This event is one of a series of tournaments taking place internationally throughout the year. VEX Competitions are recognized as the largest and fastest growing competitive robotics programs for elementary schools, middle schools, high schools and college aged students around the world. There are more than 23,000 VEX teams from over 61 countries that participate in over 2,500 events worldwide.

The VEX Robotics Competition provides kids with an engaging hands-on learning experience that instills a passion for STEM, and teaches them how to become critical problem solvers, which will serve them well into their future.

The VEX Robotics Competition is managed by the Robotics Education & Competition Foundation and serves as a vehicle for students to develop critical life skills such as teamwork, leadership and project management, honed through building robots and competing with like-minded students from the local community.

Southland one act play team to perform ‘Lafayette No.1’

For 2020, the Southland School one act play team will be performing “Lafayette No. 1,” the story of a Yellow... read more