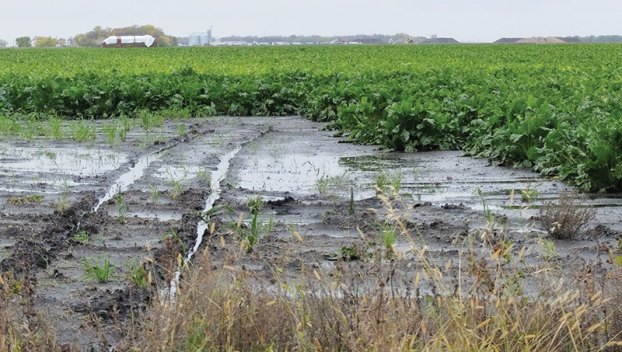 Saturated soil delayed the harvest for many farmers this fall, including on this sugar beet field near Stephen, Minnesota, in October. Dan Gunderson/MPR News

Crops are still standing in snow-covered fields in parts of the Upper Midwest, including Minnesota. They weren’t harvested last fall because rain left the ground too soggy for farm equipment — and then heavy snow buried many fields.

Those wet fields will likely be a challenge again during spring planting. And one of the region’s top farm bankers said he sees other challenges ahead for the 2020 season.

“Projections are tough right now,” said Marc Knisely, CEO and president of Fargo-based AgCountry Farm Credit Services. “I mean, when you look at an average yield and you look at what the current commodity prices are, it’s tough to project a profit.”

AgCountry is a cooperative lender with more than 18,000 customers in rural Minnesota, North Dakota and Wisconsin. It’s part of the nationwide farm credit system established in 1916 by Congress to expand credit options in rural areas.

Like most lenders, AgCountry assigns a credit risk score to each loan it issues — and across the region, ag loans have gotten riskier, as bad years with relatively low profits pile up.

“Credit quality, I think, as measured by most financial institutions, has deteriorated over the course of the last five to six years, but not as significantly as we thought the potential was,” said Knisely.

Farm income peaked in 2013 during a short period of strong prices and good yields. But income has trended much lower since then, forcing farmers to refinance debt when they don’t earn enough to pay back the loan they take out each year to plant crops.

Land prices remain high. For farmers who own land, that helps keep balance sheets out of the red.

Interest rates are low — which saves farmers money on the credit they need to plant a crop each year.

And the nonfarm economy is strong in most of the region, which has allowed many farmers to buffer their losses with off-farm income.

Farm income for 2019 is forecast to increase slightly over the previous year, according to the U.S. Department of Agriculture economists, but only because of a big infusion of direct government payments. Those payments included $14.5 billion in market facilitation program payments the Trump administration sent to farmers to offset the impact of the trade war with China, which drove down farm prices.

Those payments were a welcome economic boost for many farmers — and helped many farmers pay expenses this year — but they can actually complicate financial planning.

“You really can’t count on those types of payments,” Knisely said, “so from a lending standpoint, it just creates a lot of uncertainty both for our producers and for us as a lender. “

Knisely said he hopes recent trade deals with Mexico, Canada and China will help farm profits rebound, but he said what farmers need most is open access to world markets.

Most farmers keep their banker updated on financial progress throughout the year, but this time of year, they’re looking back at the previous year and tweaking their plans for the coming growing season. They hope it’s less than three months away.

And because of the financial stress, Knisely said that lenders’ relationships with farmers are taking on a new aspect: They’re paying close attention to signs of emotional stress in farmers and each other as they work through sometimes difficult conversations.

His most important advice for farmers is to maintain clear communication with their lenders in those tough talks, leaving no room for surprises in the farmer-lender relationship.

“Oftentimes when producers run into financial difficulties, you can tend to become a little paralyzed,” said Knisely, “and that’s why it’s all the more important to have a plan in place and execute on the plan that you have.”

While many farm balance sheets are showing signs of weakness, Knisely said he doesn’t foresee a big surge in farm bankruptcies — and so far, the data bears that out.

“As a former farm kid I’m just always optimistic,” said Knisely. “Farmers in general are very sophisticated business people and I think that there’s an underlying principle that that will help us sustain agriculture through a cycle like this.”

Knisely watches a lot of economic indicators throughout the year to gauge the health of the farm economy. But the most important indicator for him is simple: Will weather and markets improve enough to allow farmers to earn a profit in 2020?

US seeks to tighten rules covering service animals on planes

The days of passengers bringing rabbits, turtles and birds on planes as emotional-support animals could be ending. The U.S. Transportation... read more