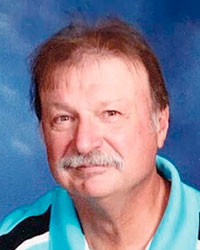 Thomas Mark Ferguson was born on Jan. 12, 1950, in Canton, South Dakota, the son of Paul and Judith (Goeman) Ferguson. He was baptized and confirmed at the First United Methodist Church in Austin, Minnesota. Thomas “Tom” attended Austin Public School, graduating with the Class of 1968. He then furthered his education at Austin Community College and later St. Cloud State University, earning his degree in education. Tom was united in marriage to Marcia Michels on Dec. 22, 1973. After graduating from college, the couple moved to Mahnomen and Tom began his teaching career at the Gary Public School, where he also coached girls basketball. Tom and Marcia were blessed with two children, Scott and Darcy. They made their home in Mahnomen for 34 years before purchasing their lake home in 1998 on Star Lake near Dent, where Tom loved “lake life” to the fullest. In the mid 1990s, he started teaching and coaching boys basketball and golf in the Mahnomen Public School District. He retired in 2006.

Tom always enjoyed anything pertaining to sports and was a great athlete. He played basketball and softball in high school and college, earning bragging rights for having played in college basketball against former NBA player Mychal Thompson. Over the years, Tom played on numerous adult basketball leagues and softball teams, as many as three at a time, until he was in his 50s! He also spent many hours playing on the men’s golf league at the Mahnomen Country Club and later in Lake Havasu City. Tom was an avid hunter for many years.

After retirement, Tom and Marcia started wintering in Arizona, enjoying three months every year in the same place, Lake Havasu City. Until this year, his fishing boat always followed them down. He loved to fish and spend time on the pontoon, especially when surrounded by friends and family. Fishing trips up north with his Dad and Scott were always special times. Tom also treasured time spent with his three grandchildren, following their many activities and taking them to “Nootzies” for breakfast after a sleepover with just Grandpa.

Tom was diagnosed with Stage 4 Pancreatic Cancer in the summer of 2018. He fought a courageous battle without complaints. The family would like to thank the doctors and staff at the Roger Maris Cancer Center and Perham Health Facility for their wonderful care.

Memorial services will be held at 11 a.m. on Monday, Jan. 20, 2020, at St. Michael’s Catholic Church in Mahnomen. A time of gathering will take place one hour prior to the service on Monday at the church. Arrangements are with Anderson Family Funeral Home of Mahnomen. An online guestbook can be seen at www.andersonfamilyfh.com.