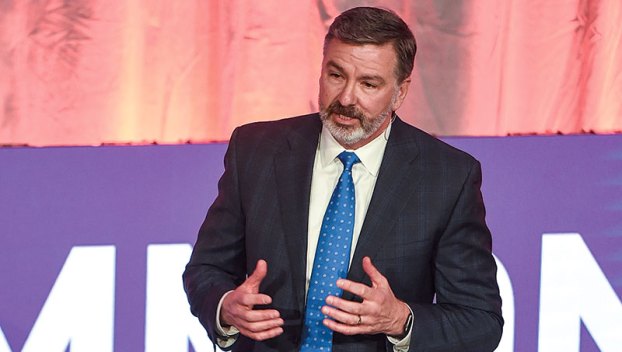 As in previous years, the company talked about its advancements and success in a number of different areas that included the reveal of $9.5 billion dollars in net sales for 2019, a one percent increase from the previous year.

But one of the real successes that Chairman of the Board, President and CEO James Snee touched on was the success of people within the communities Hormel has a presence in.

Three stories were told, all of them reflecting the success of company employees within each of the communities.

First were the stories of members of a group that fled the strife and conflict of Sudan, known as the Lost Boys of Sudan.

Santino Deng and Chol Jol were two of the three featured in a video shown during the meeting, who ultimately came to call Hormel a part of their family. Both were at the meeting Tuesday.

Next was the story of Samuel Ehret, a boy with autism who came to work and thrive at the Spam Museum under a new initiative to be more inclusive to those with autism in a business setting.

The third was Elise Cline, a 13-year-old from West Virginia who was doing her part to try and ease hunger in her hometown by making sure kids from impoverished homes had warm meals over Christmas.

All three stories reflected the impact Hormel has had on their communities.

“Everyone has a story and we will continue to advocate for and support those communities we share,” Snee said.

Snee went over the entirety of 2019, highlighting key areas that saw success, sometimes in the face of what he termed as headwinds from tariffs and struggles in global trade, observing that despite these things, Hormel still saw strong business in China.

One of the other big things Snee highlighted was that thanks to another strong year, Hormel was able to reinvest $290 million back into company resources from around the country.

However, to continue the successes of 2019, Snee laid out a list of six things the company needs to continue striving for:

“Know that your company is in great hands,” Snee said in closing.