Southland’s Schmitz will be a Mustang

When Southland grad Jackson Koenigs was asked who he wanted to line up next to him at linebacker during his senior season five years ago, he may have surprised a few of his teammates when he picked Carter Schmitz, who was just an eighth grader at the time.

Schmitz stepped up to the plate that season and he’s been been a physical force for the Rebels ever since. Now he’s going to take his game to the next level as he has committed to play college football at Division II Southwest Minnesota State University in Marshall under a partial scholarship next season.

He picked SMSU over Division II Bemidji State University based on the people he met in the program.

Schmitz, who played in the Minnesota All-Star game this year, had 71 tackles in just five games this season for the Rebels. He finished his Rebel career with 246 tackles, eight interceptions and five fumble recoveries.

Schmitz is known for many things in Southland. He once dressed up with an American flag costume during basketball games when he was recovering from one of his two ACL injuries, he can dead lift 500 pounds, bench 315 and he also wears a very noticeable mullet. At least one of those aspects will stay the same for Schmitz next year.

“Of course I’m going to wear it in college. I don’t have a choice. The mullet wears me, I don’t wear the mullet,” Schmitz said. “(Southland grad) Travis Russell wore it before me and it looks like we’ll have guys wearing it next year (in Southland).”

“He’s such a great leader and he leads by example,” Kennedy said. “I didn’t utilize Carter like I really wanted to this year, because he was coming back from his ACL injury. I didn’t want to take the chance of messing with his college career. He was still healing (from his ACL injury). We played him on the outside instead of in the backfield on offense.”

Schmitz said that both of his knee injuries that he sustained during his sophomore and junior years motivated him to keep pushing on the football field. He also learned a lot about the game when he was thrust into the starting lineup as a middle schooler. 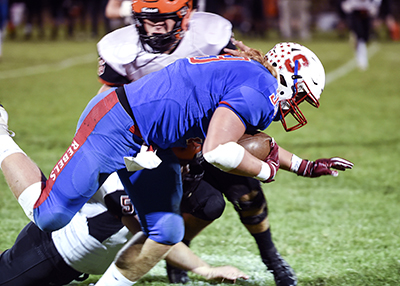 “My biggest take coming in so young is no matter what you do, you’re going to mess up at some time,” Schmitz said. “It’s what you do after that play that defines you and makes you a better player. You always look for the next play.”

The Mustangs went 3-8 overall this past season.

Grand Meadow’s Chris Bain had 24 total tackles, two fumbles forced and 16 all-purpose yards in 2019 with the Mustangs. Bain, a 2017 grad, who holds a school record with 99 career TDs, is a linebacker who missed the entire 2018 season with an injury. He is currently on the 2020 roster for SMSU.

Schmitz is the first Southland football player to commit to a Division II school since David Schotanus went on to play for SMSU as a fullback in 2012.

Kennedy is happy to see Schmitz go on to play at the next level.

“We’re just excited as heck. He’s going to do great there. I’m really excited that Carter is going on to pursue his college degree and he’s going to play football too,” Kennedy said. “He’s worked hard and he’s a student of the game.”