For the VEX Robotics teams at Southland High School, this season has been going well, with wins in regional tournaments and trips to state and national competitions on the horizon.

After five years, there are now about 40 students in the robotics program at Southland.

For this season, teams built robots that could earn points by moving blocks to a scoring area and/or stacking them on top of elevated towers. 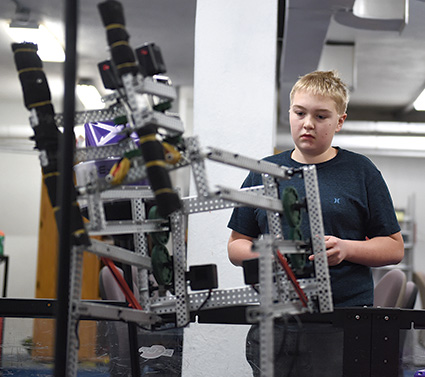 Coach Paula Mortenson said she is so proud to see the students’ hard work pay off and translate into such success.

Last year, the teams made it to worldwide competitions, with one middle school team being the first Minnesota team in that age group to win a trophy at the world level.

Students in the program are always excited to work on their projects, often asking Mortenson if they can work on their robots during lunch or study hall.

Seeing students so engaged in working on robotics, as well as other skills like web and CAD design, critical thinking and teamwork, is amazing, Mortenson said. 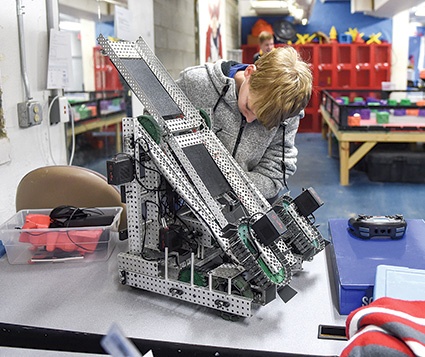 “It’s like an educator’s dream. There is nothing we want more for our kids than for them to be engaged in relevant and real critical thinking challenges,” she said.

One of the reasons the kids are excited to learn about programming language like C++ or Python, is that in robotics they can see the results of what they are learning right away, Mortenson said.

“It’s so fun as an educator to be able to see that,” she said.

In Mortenson’s view, technology is not going away anytime soon and the need to learn about it continues to grow. 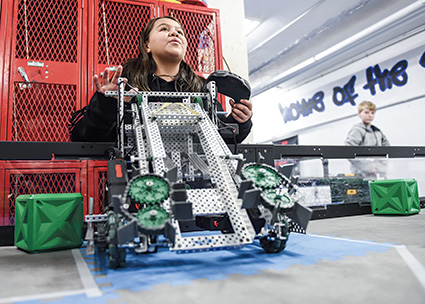 For middle school team captains Riley Walerak of the BorderBots and Luka Young of the SouthBots, robotics is a program they really enjoy.

Walerak enjoys being able to meet new people and solve the challenges the teams face, while for Young, the program is a chance to work with his hands and it goes along with another passion of his, driving RC cars.

Both Walerak and Young’s teams worked to develop robots that can meet all the tasks. Walerak and his team looked through the designs of other teams and took the best features to put into their robot, while Young and his team went through a couple of designs when their first idea was unable to do all the tasks.

Both captains were among the crews that drove the robots this year. 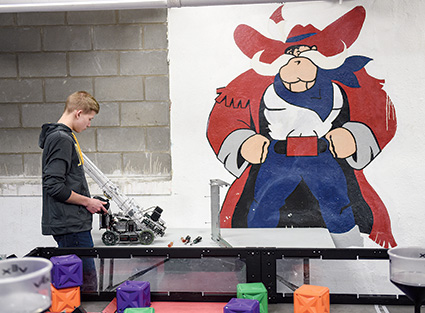 Having a team was important as it meant they could work together to do the math about what combinations of different colored cubes would score the most points, Young said.

“The different colors could mean the game if you don’t get the right ones,” he said.

Two challenges that Walerak saw were navigating around all the blocks and dealing with the pressure of a time limit.

Two years ago when he was a sixth grader in the program, the highest the teams got was 18th place. Seeing how far they’ve come is great, Walerak said. 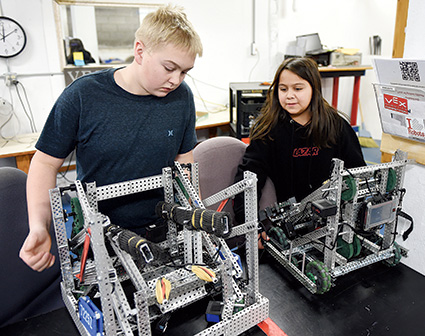 Riley Wolerack and Santa Olson pick up their robots after getting to the Bot Cave at Southland High School Thursday afternoon. Eric Johnson/photodesk@austindailyherald.com

If more people want to join, they should as it is a very fun program, Walerak said.

Both he and Young are excited to make it to the US Open in Council Bluffs, Iowa, April 2-4.

Mortenson said the School Board and district leadership have been great about supporting the program, but the teams are always looking for sponsors to help fund the program, especially when they are traveling to the US or World Opens.

Teams from Southland have already qualified for the state tournament in St. Cloud, Jan. 30-31 and the US Open.

Before then, the teams will compete at a local tournament at the Austin High School, Jan. 11, from 8 a.m. to 5 p.m.

The Southland girls basketball team rolled past Spring Grove (1-10 overall) by a score of 60-41 in Adams Thursday. Kayla... read more