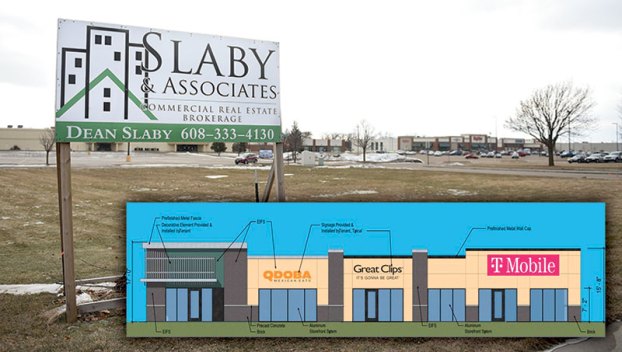 A proposed new building to be built on the old Farmer’s Market lot on 18th Avenue Northwest has taken another step forward.

Three steps forward, that is.

According to Slaby and Associates Vice President Victor Baeten, three tenants have signed lease agreements for the proposed building. Two of the businesses, Mexican restaurant Qdoba and cellular phone retailer T-Mobile, will be new businesses to Austin. The third, Great Clips, will be relocating from its current location in the old Target complex.

Slaby and Associates is the Verona, Wisconsin-based company that purchased the old Hy-Vee from the Austin Port Authority in 2018. As part of the agreement on that purchase, Slaby and Associates had to establish a new building at the Farmer’s Market lot, located between O’Reilly Auto Parts and the Hy-Vee gas station on 18th Avenue, once the renovation of the old Hy-Vee was completed.

“We knew that we would gain the interest of the national and local businesses and the ability to build from the ground up if we did the first phase correctly,” Baeten said. “Without the bigger building being redeveloped, we would not have these three leases.”

Between purchase price and construction costs, Slaby and Associates invested about $5.4 million into the old Hy-Vee, approximately $100 per square foot, according to Baeten. The proposed outparcel building will measure about 6,200 square feet with the expected final cost to be about $2 million.

‘That’s roughly $320 per square foot,’ Baeten said, noting that it is more expensive for a developer to build from the ground up than to use an existing structure.

As of now, Slaby and Associates are looking at designs, a process Baeten hopes to wrap up within 30 days. They then tentatively plan to apply for permits by March in the hopes of beginning construction in April.

‘We’re hoping to be able to turn the space over to the tenants from about mid-June through September and hopefully have them open between September and December,’ Baeten said.

Slaby and Associates is also looking at potentially building a second outparcel building. In it’s current design, that building would be almost 7,000 square and would be located on the east side of the first building.

‘We’re out there spreading the word, pounding the pavement and trying to get people to come to Austin,’ he said.

‘By providing these new options for people to shop local, it will keep people local versus looking outside Mower County for amenities,’ he added. ‘That is the whole goal of the city, to keep people and retail local.’

Several hundred middle and high school students, and their mentors, from around Minnesota will unite at  Austin High School on... read more