Robert “Bob” James Schottler, 78, of Schofield, Wisconsin, passed away on his birthday, Jan. 21, 2020, at Wausau Aspirus Hospital. Bob died after a yearlong fight with lung disease, having lived a full and active life amongst family and friends. 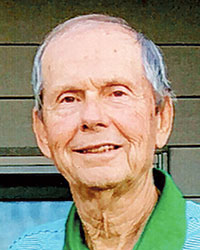 Bob was born in 1942 to George and Monica (Gainey) Schottler in Austin, Minnesota, the oldest of six children. Bob grew up in Austin, where he enjoyed being active and playing sports, especially basketball, which he played through high school, college and after. He attended St. Mary’s College in Winona, Minnesota. After earning his Bachelor of Arts degree in 1964, he worked in St. Paul, Minnesota, for State Farm Insurance. He and his family eventually moved to Rothschild, Wisconsin, in 1973. Bob and Norita raised their children in the Wausau, Wisconsin, area and Bob continued to work for State Farm for more than 40 years until retirement.

Throughout his life, Bob enjoyed attending sporting events for both his children and grandchildren. He also enjoyed playing golf, participating in bridge club and socializing with friends. He kept his mind and body active by taking walks, going to the casino and working out at the gym. Later in life, he also enjoyed spending winters in Palm Desert, California, with his siblings, extended family and friends. He greatly enjoyed the beautiful weather of Palm Desert through golfing, hiking and just relaxing.

Mass of Christian burial will be held at 11 a.m., Monday, Jan. 27,2020, at St. Mark’s Catholic Church in Rothschild, Wisconsin, with a luncheon following the service. Visitation will be held for two hours prior to the service on Monday at the church. Interment will be held at Calvary Cemetery in Austin at a later date. In lieu of flowers, the family would appreciate memorials to Gigi’s Playhouse Twin Cities, Shriners Hospital for Children of Chicago, or Wausau Area Mobile Meals. John J. Buettgen Funeral Home is assisting family at this time. Online condolences may be expressed at www.HonorOne.com.