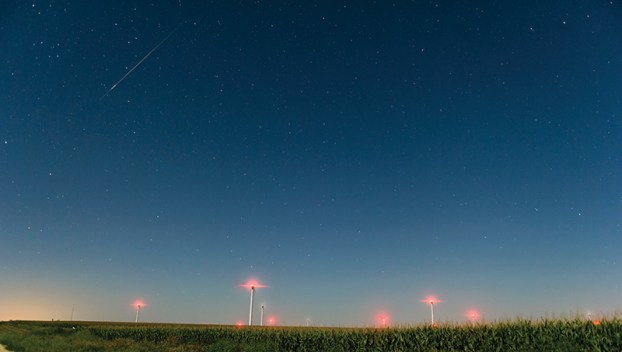 A meteor, upper lefthand corner, from the annual Persieds Meteor Shower falls over windtowers west of Grand Meadow. The upcoming Quadrantids could produce 15-25 meteors per hour. Just be ready to get up early to see it. Herald file photo

Quadrantids meteor shower may put on a show Saturday morning; But you’ll need to be up really early

There’s a chance to catch one of the best annual meteor showers very early on Saturday, Jan. 4, as long as the skies are clear and you can wake up for it.

The International Meteor Organization expects that the Quadrantids meteor shower to peak around 2:20 a.m. Central Time.

The shower has been active since around Dec. 27, and continues through Jan. 10. However, the peak — which only lasts about six hours — offers the potential to see possibly 15 to 25 meteors per hour, and even more if conditions are ideal.

The IMO suggests the best strategy to spot meteors is to face the northeast quadrant of the sky and center your view about halfway up in the sky. EarthSky.org suggests that northern latitudes have a stronger chance to catch the shower since the radiant point “is far north on the sky’s dome.”

Keep your gaze just below the Big Dipper constellation for a good chance to spot the shower’s center point, known as the radiant.

While most meteor showers originate from comets, the Quadrantids have been found to originate from an asteroid called Asteroid 2003 EH1, according to the IMO. That asteroid takes about 5.52 years to orbit our sun.

Use the star chart provided by meteorshowers.org to see how the asteroid that creates the Quadrantids meteor shower orbits our solar system.