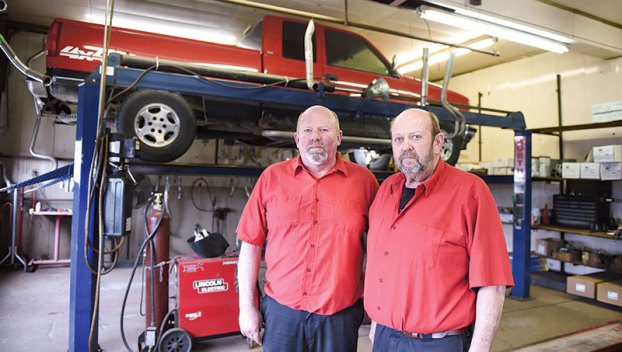 Harold, left, and Steve Sorenson stand in the garage of The Muffler Center Wednesday morning. At the end of the month they will officially retire, selling the business to an Austin man. Photos by Eric Johnson/photodesk@austindailyherald.com

Passing the Torch: Muffler Center to change ownership after more than 40 years

After more than 40 years in the vehicle exhaust business, brothers Harold and Steve Sorenson are retiring.

After working in another shop for several years, the two went into business together with the Austin shop in 1978.

Even before then, cars were a big part of their lives, with both working on vehicles when they were younger and Steve having raced modified stock cars for years, with Harold helping work on his car.

The two were always close growing up, and while they had their moments, Harold and Steve said it has been great working with one another.

Steve said the people they have met over the years has been one of the best parts of owning the business, along with the different challenges they’ve worked on over the years.

“Coming to work every morning, you don’t know what to expect,” Steve said. 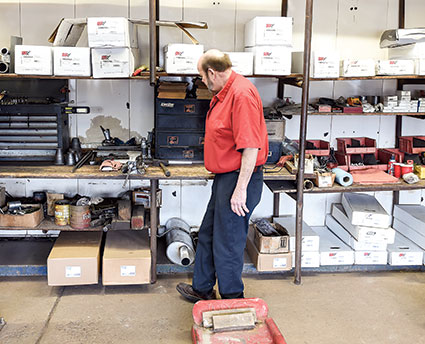 Steve Sorenson looks over parts in the back of the garage of the Muffler Center.

The two are very grateful for their customers and the business associations they’ve worked with over the years, Harold said.

“Without them, we wouldn’t have been around for as long,” he said.

With more than 40 years of work, they’ve seen customers come through, then their kids and even grandkids, for exhaust work.

There have also been a number of changes in the way cars have been worked on, from the introduction of stainless steel exhaust parts to catalytic converters and the increased role of computers and sensors.

When the computers came around, that was when the two first considered slowing down; however, they often don’t deal too much with that as they focus on working on exhaust systems, Steve said.

Being specialists in exhaust systems means they have not just had customers come to them first, but also that they are called in to work on cars for other businesses who do not want to deal with the exhaust systems. 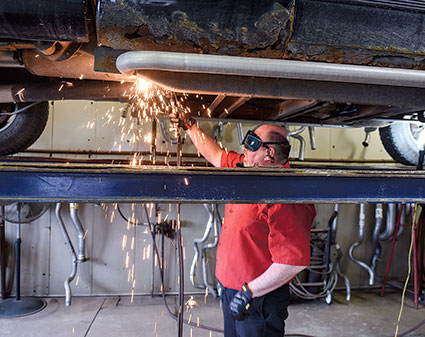 Harold Sorenson cuts away brackets holding on a muffler during work at the Muffler Center Wednesday morning.

For newer cars, performance exhaust systems are the most popular request, while the company also makes parts built to spec or customized for older cars, Harold said.

The two have decided that it is time to retire and let the younger folks take over. Mitch Meyer of Austin will be taking over the business in February.

One of the biggest reasons for retiring is that their bodies needed the rest, both said.

“Standing on concrete for 45 years with your arms over your head wears on you,” Harold said.

Doing the work on vehicles, including the newer diesel pickups with large exhaust systems and heavy mufflers has become very hard, he said.

Harold and Steve said they want to take some time to plan what they’ll do in retirement, but they do know they want to remain busy. 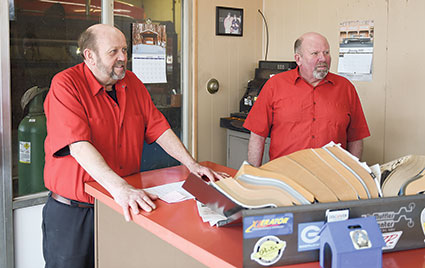 Steve and Harold talk about their over 40 years of running the Muffler Center Wednesday morning.