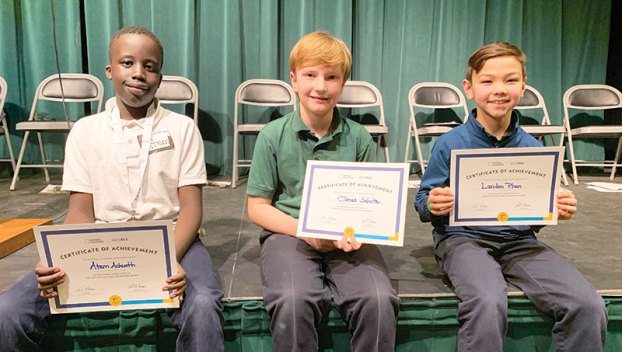 Ascension Island is located in the South Atlantic and is part of an overseas territory of what country?

This was the question that determined the champion in this year’s Geography Bee at Pacelli. The Geography Bee is a nationwide contest for schools in the United States. It is designed to encourage the study of geography in the classroom, spark student interest in the subject, increase public awareness about geography, and reward students’ curiosity about the world. Questions cover not only geography, but also ancient and world civilizations, cultures, and physical features. There are three levels of competition: school, state, and national. The ultimate goal is to advance to the national competition in Washington, D. C.; the grand prize is a $25,000 scholarship.

Pacelli held the school level competition on Friday, Jan. 24,, in the Pacelli auditorium. After completing the preliminary rounds in the classroom, the finalists from grades 4-8 participated in this contest. The finalists were:

This year’s first place winner was fifth grader Atem Achuoth. Fifth grader James Schulte was awarded second place and fourth grader Landon Phan won third place. Achuoth will compete for advancement to the state-level by taking an online qualifying test. Up to 100 of the top test scorers in each state then become eligible to compete in their State GeoBee.

For all of you geography wizards out there, the correct answer to the championship question was the United Kingdom (Great Britain and Britain were also acceptable).

134 teachers are candidates for Minnesota Teacher of the Year

The 2020 Minnesota Teacher of the Year will be chosen from a field of 134 candidates. These candidates have accepted... read more