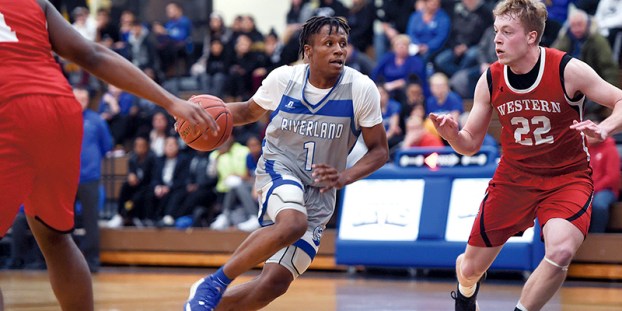 Riverland’s Montrell Jocobs drives the lane in the first half against Western Technical College Wednesday night at RCC. Eric Johnson/photodesk@austindailyherald.com

The No. 8 ranked Riverland men’s basketball team rolled out to a fast start and didn’t look back when it blasted Western Tech (6-11 overall) by a score of 85-69 in Riverland Gym Wednesday.

The Blue Devils (17-1 overall) scored the first 10 points in what was their 10th straight win, but it was the shooting heroics of Montrell Jacobs, a sophomore from Milwaukee, that put the crowd and the Blue Devil bench in an absolute frenzy in the first half.

Jacobs scored 20 points in the game’s first seven minutes in a flurry that saw him connect on five three-pointers. He put an exclamation point on his hot start when he connected on a three, drew a foul, missed the foul shot and then collected the rebound to fire off another three, where he drew a foul and converted the free throw for a four-point play. The turn of events gave Jacobs seven points in five seconds and it gave the Blue Devils a 25-9 lead. 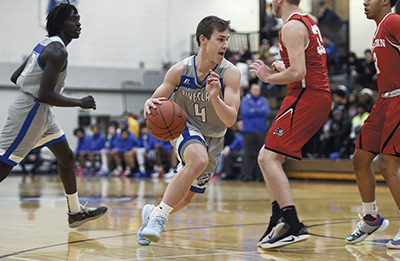 “It just felt like I was shooting in an ocean,” Jacobs said. “Any shot that I took was going to be good.”

It was just like old times for Jacobs as his old friend Mahlik Lindsey, a sophomore from Wauwatosa, Wisconsin, put on a show of his own for WTC as he pumped in 33 points on a variety of drives and deep jump shots.

“I grew up with him, we work out in the summer and he’s kind of like my brother,” Jacobs said of Lindsey. “It was kind of fun. It kind of reminded me of middle school when we played against each other.”

RCC head coach Derek Hahn said that Jacobs gives the Blue Devils a scorer who can explode on any given night. 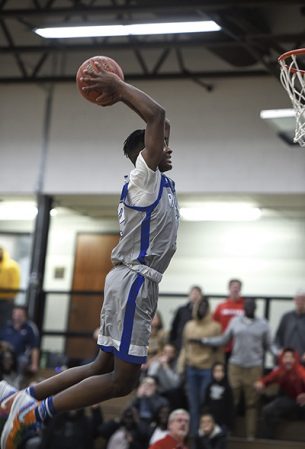 “One thing we’ve been blessed with over the years is some phenomenal talent and Montrell is definitely not short on that. He’s been carrying us on offense along with Terrell (Smith),” Hahn said. “It’s not like we go into a game saying, we’re just going to get the ball to Montrell. He kind of took off tonight and then he just did his thing. He’s obviously a very talented player and he’s going to get a scholarship because of that.”

RCC had just 10 points off the bench as it had led by 28 points at the half.

“One thing we pride ourselves on is our depth and that makes s difference come Region Tournament time,” RCC head coach Derek Hahn said. “That’s what makes a team good and we just didn’t really get that tonight.”

RCC’s ranking of No. 8 in NJCAA Division III is the highest in program history.

Jacobs said the team is staying focused on the task at hand.

“We’re taking it one day at a time and we keep trying to get better in the gym,” Jacobs said. “We have to stay prepared for our next opponent.” 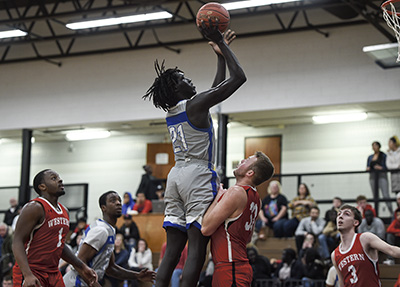 Riverland’s Nyagoa Obany with the post jumper during the first half against Western Technical College Wednesday night at RCC. Eric Johnson/photodesk@austindailyherald.com