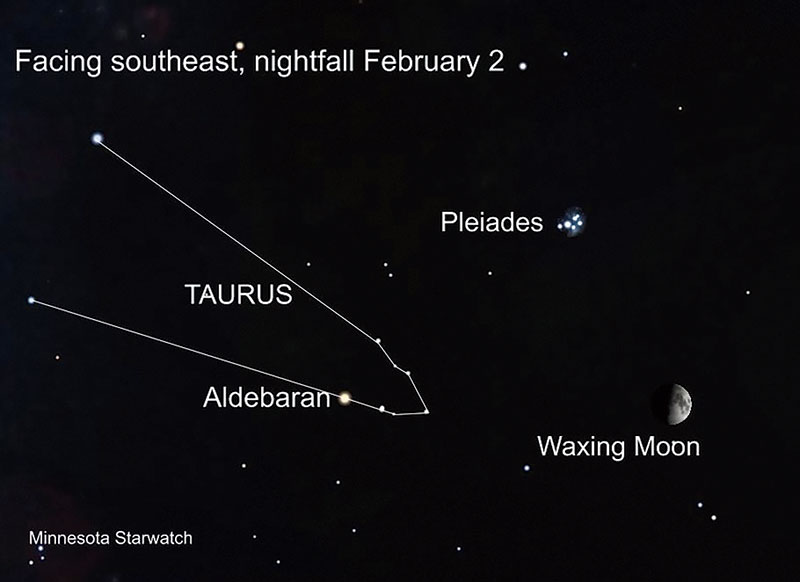 By Deane Morrison
A University of Minnesota feature

A dazzling evening “star,” Venus comes out in twilight and sticks around long enough to outshine all the real stars against a dark sky. So bright is our sister planet, it has been mistaken for a UFO. Watch it climb in the southwest throughout the month, and be sure to catch it on the 26th and 27th, when a waxing crescent moon appears near it.

The moon takes many partners this month, especially as it tours the group of bright winter constellations now moving onto center stage in the southern sky. On the 3rd, a bright moon crowds the face of Taurus, the bull, and its bright star Aldebaran, the bullseye. On the 6th, a fatter moon will shine near the Gemini twins Pollux (the brighter) and Castor.

February’s full moon rises in the late afternoon of the 8th and reaches fullness at 1:33 a.m. on the 9th. This full moon will be quite big and bright, since the moon reaches perigee, its closest approach to Earth in an orbit, only about a day and a half later.

In the morning sky, the three outer planets — Mars, Jupiter and Saturn — are positioning themselves for a spectacular dance in March and early April. All rise in the southeastern predawn sky; Mars first, then Jupiter and finally Saturn, which may be too low to easily see until the last few days of the month. When the three planets are all above the horizon, they will form a nearly straight line, with brilliant Jupiter in the middle.

On the 18th, a thick waning moon passes in front of Mars, making the red planet disappear behind the moon’s illuminated side. Mars may be hard to see next to the moon’s glare, and the time of Mars’s disappearance varies slightly by location. But if you get out by 5:45 a.m. you should be able to watch the event.

On the 2nd, we celebrate an astronomically based Celtic holiday known as Imbolc, or lamb’s milk. It was one of four cross-quarter days falling midway between a solstice and an equinox. It was held that a sunny day predicted cold and continued winter, but a heavily clouded, shadow-free day portended warm spring rains that would soften up the fields for planting. This myth survives in modern Groundhog Day rituals; if the groundhog sees its shadow it means six more weeks of winter, whereas thick clouds mean spring is right around the corner.

The Wide Angle: The mad science of meadery