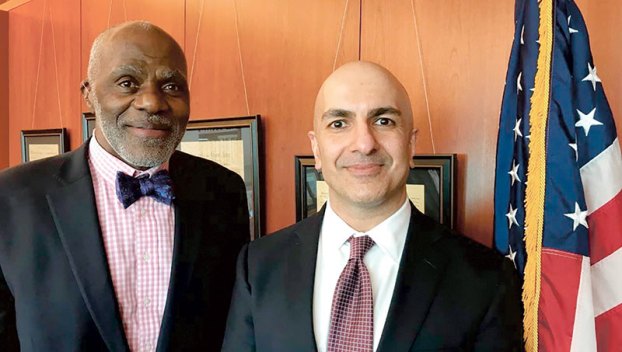 Two prominent Minnesotans launched a campaign Wednesday to change the state’s constitution in an effort to eliminate persistent disparities in education.

“With all due respect, that’s like a McDonald’s uniform franchise of adequacy,” Kashkari said. “Is that what we aspire for Minnesota’s children? I don’t believe that.”

The new language proposed by Kashkari and Page starts with the phrase, “All children have a fundamental right to a quality public education that fully prepares them.” They say it’s meant to focus on outcomes for kids.

“The old language focuses on educational systems and inputs into that system. The new language shifts the focus to children and outcomes,” Page said. “For me this is about … social justice, economic justice. This language embraces that.”

Most Minnesotans, Kashkari said, “don’t realize that we have some of the biggest achievement gaps in the country. They’re shocked. They don’t believe it when they first hear it. It’s true. We’ve done the research at the Minneapolis Fed.”

Last year, the Minneapolis Federal Reserve released a study showing that Minnesota’s disparities by race, ethnicity and socioeconomic status are among the worst in the country, and that they affect students across the state.

“The good news is it doesn’t have to be so. Other states are making real progress,” Kashkari said.

Page and Kashkari point to the nearly 200 amendments to state constitutions made in the past several decades. And they point to Florida’s changes to its education clause in 1998 as a case study.

“If you look around the country, when states have amended their constitutions, it has typically led to big legislative changes to follow because it becomes clear — now children have this fundamental right and the legislature has to act and only if they fail to act will the courts get involved,” Kashkari said.

Several Minnesota officials, representatives and leaders in both business and education have come out in support of the proposal, including Attorney General Keith Ellison, Rep. Rena Moran, DFL-St. Paul, and Rebecca Crooks-Stratton, secretary/treasurer of the Shakopee Mdewakanton Sioux Community’s Business Council.

“The amendment opens an important discussion about quality schools and placing all Minnesota children first,” Ellison said. “This bold step is long overdue.”

Gov. Tim Walz hasn’t committed to any specific support of the proposal. Spokesperson Teddy Schann said Walz “is glad to see the Fed and business community championing educational outcomes for all Minnesota children, and he looks forward to working with them to ensure that every child has access to a world class education, regardless of their race or their ZIP code.”

But others have raised concerns about the proposal. Sen. Carla Nelson, R-Rochester, said she’s excited about a new idea to address the achievement gap but cautious about what the proposal could mean.

“This removes the state’s obligation to pay for a uniform system of public schools. We already have a funding crisis in our schools and to take away the obligation from the state — who’s going to pay for our schools?” said Education Minnesota President Denise Specht. “I believe this opens the door for vouchers. When we remove the requirement for uniform schools from our constitution, it opens the door for pro-voucher groups, and that’s something we have opposed for a long, long time.”

After Tuesday’s meeting, if someone has something they need notarized, they can get it done for $1 a signature at... read more