Joseph Perry White, 33, of Austin was charged with felony first-degree drugs – possess 50 grams or more of methamphetamine, misdemeanor possess over 1.4 grams of marijuana in a motor vehicle and misdemeanor driving after revocation on Wednesday in Mower County District Court. 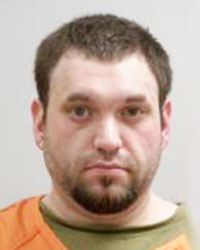 According to the court complaint, an Austin police sergeant was on routine patrol at about 6:23 p.m. on Jan. 7 when he spotted a 2005 Buick LeSabre with its side brake light out at the intersection of West Oakland Avenue and 14th Street Northwest. He initiated a traffic stop in the 2100 block of West Oakland Avenue and advised the Buick’s driver, White, as to why he stopped him.

The officer ran White’s information and learned his license status was “revoked,” though White said he was not aware his license was invalid. The officer spotted marijuana “roaches” in the vehicle’s ashtray; White said they were not from that day. When asked if he had any contraband in the car, White said no.

Police searched White and located a small amount of methamphetamine in his pocket. They arrested White and placed him in a squad car, at which point White began to act like he was having a medical episode. He was transported to Mayo Clinic Health System-Austin and cleared by medical staff before being transported to the Mower County Jail.

Police searched the vehicle and found the following:

A review of White’s criminal history shows prior convictions for drug possession.

White will appear in court again on Jan. 16.

The Grand Meadow Business Center will be hosting a ribbon cutting and open house for its newly expanded gym and... read more