Marlo T. Flo, 89, of Rochester, Minnesota, and formerly of Hayfield, Minnesota, died of Alzheimer’s disease on Tuesday, Jan. 7, 2020, at The Bluffs of Lake City, Minnesota. 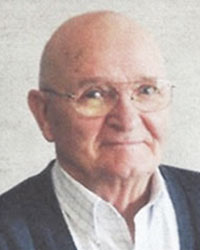 He was born June 3, 1930, at home to Otto and Lillian Flo, rural Winnebago County, Iowa. Marlo’s education included country school in Worth County, Iowa, High School in Grafton, Iowa, and Mankato State Teachers College, from which he graduated in 1957.

In 1951, Marlo was drafted into the U.S. Marine Corps and served his country at Camp Pendleton, Oceanside, California. Following boot camp, he married Mary Ann Larson on June 22, 1952, at St. John’s Lutheran Church in rural Elkton, Minnesota. Returning to California, the couple made their home in Vista, California, until his discharge in 1953.

Following his military service, Marlo began his teaching career at Ceylon, Minnesota, as a high school teacher and coach. Later, he was employed at Milford, Iowa, Public Schools and Hayfield Public Schools. He retired from Hayfield in 1990 as the high school librarian.

Marlo and Mary Ann had many happy retirement years at their “Freedom Forty” farm near Dexter, Minnesota. When Marlo’s health began to fail, the couple moved to Shorewood Senior Campus in Rochester and later to The Bluffs of Lake City.

Marlo and Mary Ann have been long time members of Trinity Lutheran Church in Hayfield, where Marlo was involved in various church activities. He was also active in the Hayfield Lions Club, American Legion, and Cedar Valley Rehabilitation Workshop.

Maarlo’s favorite pastimes included spending time with family, playing cards, and fishing. He enjoyed many trips to Canada with his group of fishing friends, “The Lucky Eight.”

A memorial service will be held at 11 a.m. on Saturday, Jan. 18, 2020, at Trinity Lutheran Church, 104 First St. SE in Hayfield with the Rev. Paul Hauschild officiating. Visitation will be one hour prior to the service on Saturday at the church. Rothie American Legion Post 330 will conduct military honors. It was Marlo’s wish that his body be donated to Mayo Clinic for Anatomical Research. Cremains burial will take place at Fairview Cemetery in rural Hayfield at a later date. In lieu of flowers, memorials are suggested to Mayo Clinic Hospice in Rochester, REM Inc. (a residential facility for the mentally disabled in Fairmont, Minnesota), Mayo Clinic Alzheimer’s Disease Research in Rochester, or to a recipient of donor’s choice. To share a special memory or condolence please, visit www.czaplewskifuneralhomes.com.