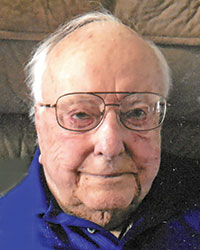 Kenneth was born March 19, 1919, in Estherville, Iowa, the son of Roy and Hazel (Griffith) Kelly. He graduated from Austin High School in 1939. Kenneth met Elnora Mueller on a blind date and they were later united in marriage on Oct. 4, 1940, in Estherville. They made their home in Austin until August 1942, when they moved to Neosho, Missouri, then went on to India, where Kenneth was stationed with the U.S. Army until 1945. He was employed with the Milwaukee Railroad for many years before retiring in 1963, when he began writing. Kenneth liked to write about railroad history and enjoyed writing poetry and stories. He had many stories and poems published with Compass and recently had his own book published, “Dubbie and The Dragon.” Kenneth will be dearly missed by his family and friends.

Funeral services will be held at 11 a.m. on Tuesday, Jan. 28, 2020, at Worlein Funeral Home in Austin. Visitation will take place one hour prior to the service on Tuesday at the funeral home. Interment will be in Oakwood Cemetery. Memorials are preferred to the family. Services are prearranged and performed by Worlein Funeral Home in Austin. Condolences may be expressed to the family online at www.worlein.com.