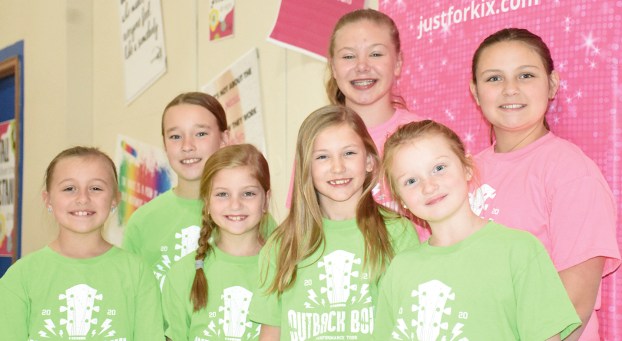 It was late December on a chilly 62 degree day and Elly Diaz of Austin was dipping her feet in the Florida water, but before she knew it, her mom was tugging her back onto the beach.

“It was cold and my mom said that we couldn’t change (for swimming) because it would be freezing, but I went in and she pulled us out of the water because she thought that our lips were going to turn blue,” Diaz said.

Diaz’s mother wasn’t being overprotective, she was making sure her and seven other Austin girls would be ready for their big day in front of a big crowd. Those eight girls, which also included Renee Vossler, Harper Edwards, Stella Thoma, Clara McIntyre, Ella Diaz, Kiera McIntosh and Ayla Gullickson, all traveled to Tampa Bay, Florida. They headed south to dance before and at halftime of the Outback Bowl with Just For Kix dancers from 11 different states. 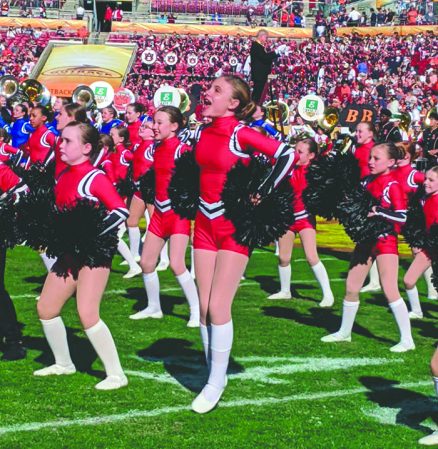 A group of eight Just For Kix dancers from Austin recently joined dancers from all around the country to perform at halftime of the Outback Bowl in Tampa Bay, Florida. Photo Provided

The Minnesota Gophers beat Auburn 31-24 in the Outback Bowl on New Year’s Day.

The seven-day trip allowed the Austin attendees to go to Busch Gardens, a dinner cruise, a beach day and Universal Studios or Disney World. They also spent about three hours every morning practicing their routine.

Besides seeing new sites and learning more about dance, the Austin girls found themselves becoming better friends as the trip went on.

“At first we were kind of separated, but then we all started hanging out together,” Edwards said. “Everyone was really happy to be down there and we all had to get used to being in Florida instead of Minnesota.”

As the trip went on, the older girls began to take the younger girls under their wing. It wasn’t long before they were jokingly referring to the younger dancers as their children.

“We rarely got to see our parents,” Clara said. “On the day of the game, we got off the bus, walked over to the field and our parents stayed on the bus. Aya and Kyra were like our parents.” 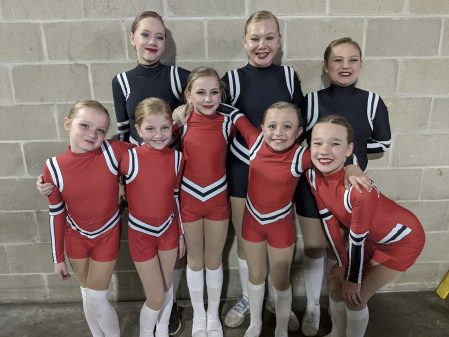 The performance at the Outback Bowl saw approximately 400 Just For Kix dancers perform in front of nearly 50,000 fans. There were some nerves on the field, but mostly smiles and joy.

“It was really cool looking up on the big screen and seeing what we looked like,” Ella said. “It was surprising how many people were there before the game and during the game.”When the trip came to an end, there were girls who had a tough time saying goodbye to the new friends they had gained, who lived far from their homes.Some people made friends and they didn’t like saying goodbye to them at the airport,” Renee said. “There were a lot of people crying because they were so upset that they had to leave because they live on different sides of the state.”

There is no doubt that dance is big in Austin High School as the Austin Packer Dance Team has gone to 17 straight Minnesota State Dance Meets. Dance is also big for the elementary and middle school students, who look up to high school dancers as role models. They also strive to reach their level.

“We work on things that get harder as we move up until we get to the high school level,” Edwards said.

For the parents who went along for the ride to the Outback Bowl, they were able to have a once in a lifetime experience of watching their children on the big stage, while also scoring vacation in the sun during the cold winter months of Minnesota.

Katie McIntrye, who is Clara’s mother, said the week went by as smooth as one could hope when you take nearly 1,000 people (counting friends and family) from different communities and put them in Florida for a week.

“It is a well oiled machine,” Katie said. “The kids are kept very busy, they practiced a lot and they had lots of fun. They had experiences that they might not get to do on a family vacation and they’re doing it with their closest friends and their dance buddies.”

Every year, hundreds of Just For Kix dancers from across the United States perform in the Outback Bowl in Raymond James Stadium.

To the view the pre-game and halftime performance at the Outback Bowl, visit the Just For Kix page on Facebook. 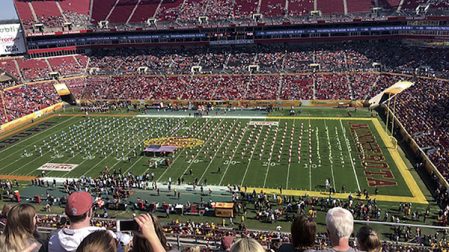 A group of eight Austin girls were amongst the big group of Just For Kix dancers who filled Raymond James Stadim for pre-game and halftime shows at the Outback Bowl on Jan. 1. Photo Provided

This past weekend the YMCA Austin Stars gymnastics teams competed in the Icicle Invite in New Prague. The Firecrackers team... read more