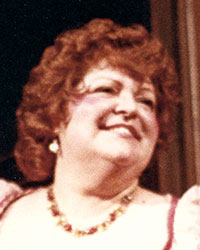 Joan Jeanette Bremseth was born July 24, 1938, to Ralph and Hattie Bremseth in Lanesboro, Minnesota. She spent her early years in several Wisconsin cities, traveling with her father’s construction business, until settling in Racine, Minnesota. She then graduated from Stewartville High School.

Joan attended college at Mankato State, Winona State, and the University of Wisconsin, earning Masters Degrees in speech/English, and theatre. She taught high school in Grand Meadow, Minnesota, and Elgin, Minnesota, and owned and operated a theatrical costume rental agency.

Joan was an accomplished writer with several novels, many plays, and numerous newspaper columns to her credit. She was involved in area theatres as a director, costumer, actor, lighting designer and administrator, and was honored with Rochester Civic Theatre’s Lifetime Achievement Award. A special love of Joan’s was the support and encouragement of playwrights, leading to her creation of the Rochester Playwright Festival. Joan was also a visual artist, creating beautiful whimsical sculptures from found treasures.

Joan is survived by her husband of 45 years, Doug Sween; daughter, Sheldyn Himle (Sam) of Milwaukee, Wisconsin; brother, Michael Bremseth (Diane) of Tennessee; sister, Diane Thompson of North Dakota; nieces and nephews; and in-laws. She was preceded in death by her parents.

Thanks are expressed to Mayo Clinic Hospice for their compassion and competence.

There will be no services.  Memorials are suggested to any educational foundation, theatrical endeavor, or to Paws and Claws or other animal rescue organizations.